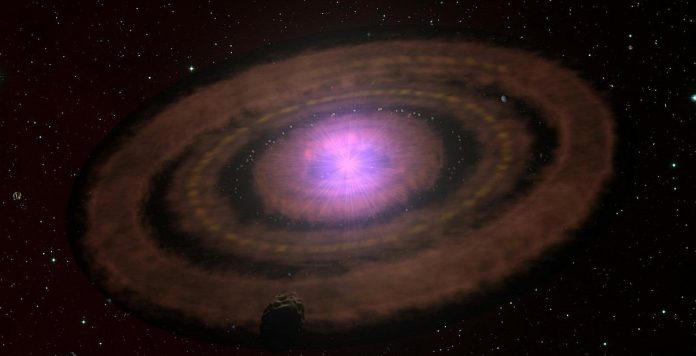 A research team including Alvaro Hacar of the Institute of Astrophysics at the University of Vienna used ALMA to study the mass distribution of more than 870 planet-forming disks in the Orion A cloud and found surprising similarities: the dust mass of only planet-forming disks decreases with age, and the chemical composition and dynamics of the original cloud do not appear to be play a role. A new data reduction method has also been developed for large sample analysis in an unprecedented way.

The question of how similar other planetary systems are to our own solar system is one of the most exciting astronomical research today. A recent study involving astrophysicists from the University of Vienna showed that planetary systems evolve surprisingly similarly.

For the study, currently published in the Journal of Astronomy and Astrophysics, more than 870 planetary composition discs were examined. The key here is disk mass: disks of dust and gas form around young stars and condense into rings. Over time, rocks, and eventually planets, grow, reducing the mass of the dust and gas cloud.

“Until now, we didn’t know exactly what characteristics dominate the development of planetary disks around young stars,” says lead author Cirque van Teroisga, a scientist at the Max Planck Institute for Astronomy in Heidelberg. To study how this process occurs and what influences it, the team of astronomers selected the Orion A cloud, a large and known region of young stars located about 1,350 light-years from Earth. “The statistical power of our images of 873 disks around young stars has been crucial to detecting small differences in disk mass with age and even with local environments within the Orion A cloud,” explains Alvaro Hakkar of the University of Vienna’s Institute of Astrophysics.

See also  This is how voice messages are improved - iTopnews.de - Apple's current news and discounts on iPhone, iPad and Mac

The new results now show that the mass of the disk is strongly dependent on the age of the stellar disk system – at least if the disks are not affected externally, for example by very hot stars in their vicinity. No strong connections were found with other properties of the planet’s constituent disks, such as their chemical composition or the dynamics of the original cloud from which the young stars and their disks emerged; However, the association between disc mass and age was surprisingly high. “Our results indicate that the planet’s constituent disks evolve in a similar way without outside influences,” says Hacar.

The sample is based on previous observations using the Spitzer Space Telescope, which identified the disks. The disk mass was then measured using the Atacama Large Millimeter/ Sub-millimeter Array (ALMA) located in the Chilean Atacama Desert. For the study, each disk was targeted with a wavelength of 1.2 mm: “In this spectral range, cold dust becomes visible, but not all objects larger than a few millimeters – from rocks to planets. So we really measured the mass from which planets can form” Hikar explains.

ALMA consists of 66 parabolic antennas that work like a single telescope. Data consolidation and calibration can take months using the standard method for such a large data set. Therefore, the team also developed a new data reduction method, which is based on parallel computing and increases the processing speed by 900 factors. Computing and preparing data for analysis – which requires at least 3,000 CPU hours – can be managed in just one day.

The astronomers also compared the results for Orion A’s cloud with several other star-forming regions — with two exceptions, strong connections between disk mass and age were also found there. Thus the study shows that “at least within the next 1,000 light-years or so, all the constellations of disks that make up the planet will have the same mass distribution at a given age,” according to lead author Van Teroisga. The result may be evidence of the formation of surprisingly similar planetary systems.

In the next step, the team wants to investigate possible influences from nearby stars that are a few light years away. “The unprecedented size of our sample opens a new window for studying the formation and evolution of entire disk clusters at cloud scales,” confirms Hacar of the University of Vienna.

PlayStation Now games in May 2022