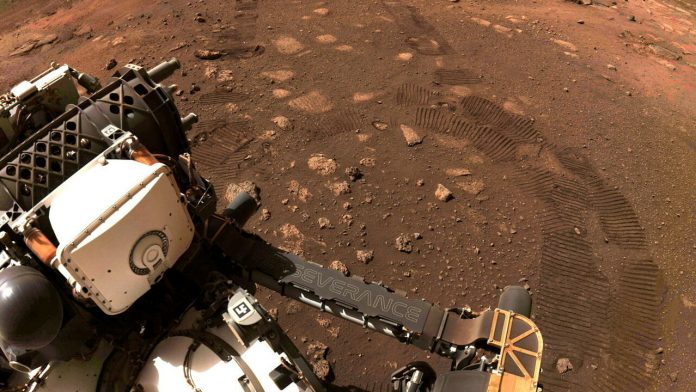 The Perseverance robot has been on Mars since February, and is presenting its first results. The craft discovered that the place where it landed was an ancient lake on the Red Planet.

That was to be expected, but the first high-resolution images of the camera confirm the evidence of observation in orbit: the crater, about 35 kilometers in diameter and a hundred meters deep, had already sheltered a closed lake, previously fed by a river across the delta, between 3.6 and 3 billions of years.

Thanks to satellite observations, traces of it were seen in the crater called Jezero. For this reason, Android perseverance last February. Eight months later, that’s a confirmation. An affirmation full of promises for the rest of the mission.

to the delta source

The study was published Thursday in the prestigious journal Science – The first since the landing of the Perseverance – gives a set of unpublished details of the history of the ancient lake site. “ We have typical strata of an underwater pool formed with a river advancing into a lake and sediment deposited. »And Explains Nicholas Mangold, of the University of Nantes, who led the study. The researcher is talking about a sedimentary arrangement that is in fact typical of lacustrine deposits.

« As on Earth, lake sediments are very good reservoirs for preserving sediments and incorporating potential organic forms into these sediments, continued. If there is one day life, it can generate organic matter and if this substance is found, it will be preserved in these sediments. This gives us the main places to analyze this hole. And that’s what we’re working on right now, it’s the rover crossing from the delta source. »

Cross two kilometers for determination. Two kilometers full of chutes before reaching these deposits. The robot can then analyze it in situ, especially sampling, which will be returned to Earth during a future mission by 2030. But beware of drifting too fast, the researcher warned, because this organic matter could be just as well coming from” inert carbon material Like that deposited by comets.

Perseverance also revealed the unexpected presence of pebbles and large boulders, witnesses to strong river currents such as flash floods. The study indicates that the end of the crater eruption period was thus the scene of a major climate change. ” What is the climate that can generate this transformation? drying, glaciation? This is what we are looking for ‘ says the geologist.

Two other robots, Curiosity and Insight, are currently roaming the surface of Mars. In September 2022, the Russian-European ExoMars mission should send a robot capable of digging into the soil of the Red Planet with a depth of more than one meter. the first.