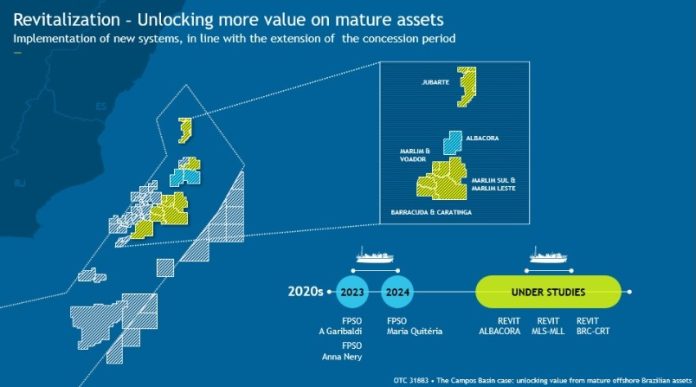 The information was provided Tuesday by the national oil company’s director of strategy, Eduardo Bordere, during a presentation at a conference on marine technology in Houston.

This procedure is part of a series of actions aimed at extending the useful life of mature assets.

By 2030, Petrobras estimates to recover an additional 20 billion barrels of oil equivalent (Mboe) in the fields in which it operates. Of these, Campos Basin will be in charge of 5Bboe.

Among the ongoing initiatives are the Marlim/Voador and Integrated Parque das Baleias projects, which include the installation of three new floating storage and storage units in 2023 (Anita Garibaldi and Anna Nery) and 2024 (María Quitéria).

In the Roncador field, Petrobras and its Norwegian partner Equinor recently began producing the first two wells of an advanced oil extraction project in the area.

The Albacora field was put up for sale by Petrobras with Albacora Leste at the end of 2020. On April 27, the company said it had closed the sale of Albacora Leste to PetroRio, but did not disclose any information about the Albacora negotiations.

The state company’s current business plan anticipates a capital expenditure of $16,000 million for Campos, including 100 new wells, revitalization of oil and gas pipelines and a fiber optic network, as well as the three new production units.

In 2026, Petrobras expects total production at Campos to be around 900,000 boe/d compared to 751,000 boe/d, according to the latest data from the sector regulator ANP.

Because of poor banking, 80% will switch to fintech