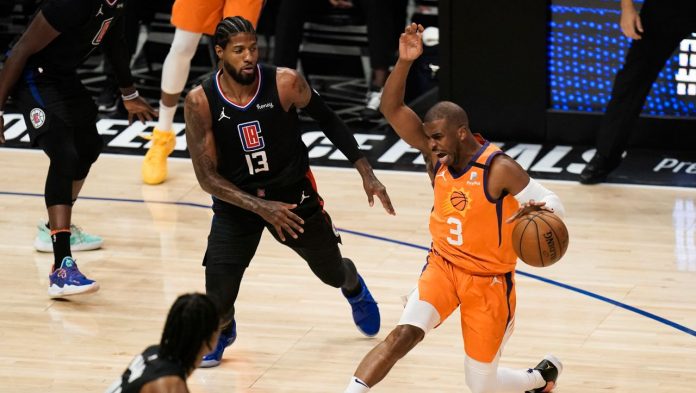 The Phoenix Suns are entering the NBA Finals for the third time in their history. The team around 36-year-old leader Chris Paul won Game Six on Wednesday night at the Los Angeles Clippers 130:103 and decided the Western Conference Finals 4:2 for themselves.

Never been a champion in the best basketball league in the world, the Suns last played for the title in the 1992/1993 season. The Clippers still have to wait for their first participation in the Finals. For the championship, the Suns play against the Milwaukee Bucks or the Atlanta Hawks.

Suns dominated the game most of the time and only lags for a while. Even without their injured star Leonard, the Clippers were on good terms and seemed to be on the right track, spurred on by fans at Staples Center, but didn’t get the incoming team from Arizona in trouble.

Paul mentored his teammates with all his routines and class and at the end of an impressive quarter-final he scored a total of 41 points, eight assists and four rebounds. This is his first participation in the NBA Finals.

“That sounds good. That was a lot of work. A lot of work,” Paul told ESPN. “It feels good.” Paul has been in the NBA for 16 years and one of the best point guards for a long time. In 2008 and 2012 he was the Olympic champion with the United States selection.

“We still have a lot of work to do, but we will enjoy it. 16 years, operations, hard defeats – but we will have fun tonight,” he said after the Suns took home the trophy for victory in the Western Conference.