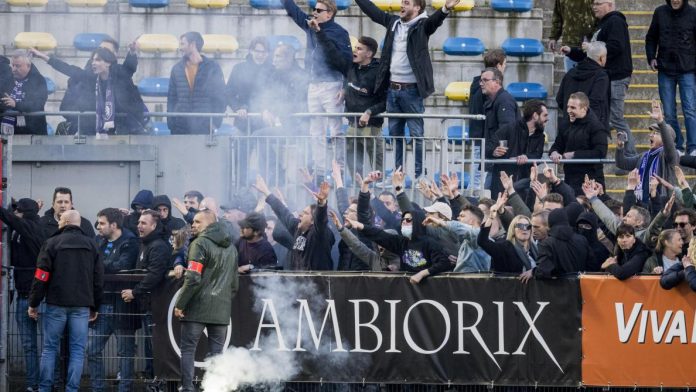 TheThe Professional League announced on Monday that it has imposed a fine of 50,000 on Beerschot, whose supporters caused the final suspension of the 34th and final day of the classic stage of the D1A football championship between Union Saint-Giloise and Antwerp, Sunday. . It was 0-0 when the 22 players returned to the locker room, less than ten minutes before time.

“The delegate’s report already confirms that Berchot fans were the reason for the early end of the match,” said Lauren Barris, the new president of the body that brings together Belgian professional clubs.

This final stop was the result of throwing the veil on the uncertainty regarding the number of points with which the Federation will begin the Champions Qualifiers on April 24th. A Unionist victory on the green carpet would allow the captain to have a three-point lead over Club Brugge at the start of the six play-off days. The Pro League and its boss are hoping for a quick result

“It is in the interests of the fans and the clubs to clarify these points as quickly as possible, with the start of the qualifiers approaching,” said Lauren Barris. I am convinced that the federal authorities will act quickly given the sports calendar. In the meantime, I have also reached out to the concerned clubs and they too would like to clarify the matter as soon as possible. So we hope to make a quick decision. »

The Prosecutor’s Office of the Belgian Football Association has seven days from the day of the match to present the federal procedure on the basis of the match delegate’s report. The Disciplinary Board must then convene the parties at least 7 days in advance. Parties still have the possibility to appeal to CBAS.

Referee Alexandre Pocot suspended the match on Sunday when visiting fans threw smoke bombs onto the lawn of the Marianne Stadium. Some Antwerp fans even entered the field to come and shout at Al Ittihad fans. Mr. Bokot, clearly considering that the safety of the players was no longer guaranteed, decided to stop the match permanently.

Lauren Barris doesn’t want to be limited to this season and is already looking to the future. The head of the professional league, who was appointed at the end of March, has made security his priority for the upcoming fiscal year. Pierre Francois’ successor confirmed: “I am currently working with all the relevant services on more stringent penalties that we will introduce with all our clubs at the start of the new season.”