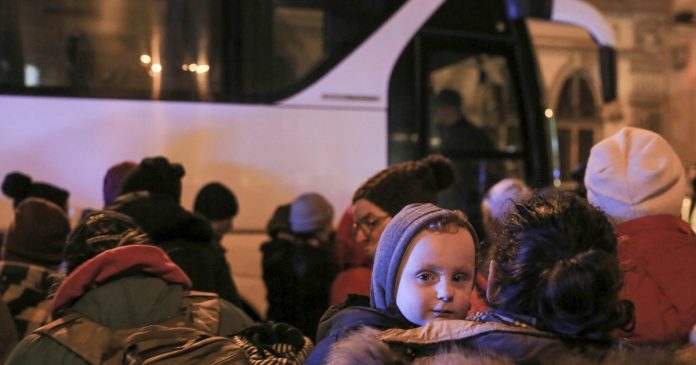 Italy was one of the last European countries not yet implemented Resolution of the Council of the European Union adopting temporary protection for refugees from Ukraine. After twenty-four days prime, Mario Draghihas finally signed the decree executing Directive 55 of 2001starting with the persons to whom protection is granted, The audience that the Council of the European Union allows states to extend and which the European Commission calls for. But most member states, and from today also Italy, refused the invitation, limiting temporary protection to Ukrainians and those already enjoying refugee status or similar protection, And left millions of foreigners legally residing in Ukraine. Those who demanded their exclusion, and the possibility of being treated on the basis of their national laws, in particular PolandAnd the HungaryAnd the Czech And the Slovakia. But one month after the Council of the European Union, the Visegrad bloc was revealed to be the dominant position, with all due respect to A committee And theUnited Nations refugee agency (UNHCR), which requested protection for all those fleeing Ukraine. “It is an affirmation that we cannot confuse the approach to the Ukrainian crisis with a real change in the orientation of EU countries on immigration,” he comments. Chiara Faveliexpert in European asylum policies and Professor of European Union Law atUniversity of Florence.

Temporary protection, which lasts for one year starting from March 4, 2022 and renewable for a maximum of two years, “applies in favor of Ukrainian citizens residing in Ukraine before February 24, 2022, for stateless persons and third-country nationals who have benefited from international services or equivalent protection before the start of the conflict and for their families.” This is what we read in the Prime Minister’s decree signed by the Prime Minister. The document also implements in Italy the directive adopted by the Council of the European Union, which in the face of the Ukrainian crisis recognizes certain categories of people Immediate protection that does not require the often lengthy process that those who submit a classic asylum application undergo. In this case the application is submitted directly to the police station, the release should take a few days and the result is guaranteed. Italy’s decision is in line with that of most EU countries, which benefited in only a few cases Possibility of extending protection to other categories of fugitives, starting with foreigners legally residing in Ukraine. Indeed, among the Ukrainians who live Five million foreignersAnd a few days after the beginning of the Russian invasion, 100 thousand people have already left the country. However, in most EU countries, Temporary protection will be denied to them. Choosing a lawyer Dario Bellocchio (ASGI) defines “serious ethnic concentration”. If they want to stay in Europe, perhaps hoping to return to Ukraine as soon as possible, they will have to apply for asylum and prove that they cannot return to their country of origin permanently and safely. A path likely to result in secondary, even irregular, flows between European countries, chosen on the basis of the permeability of immigration laws.

See also  The fourth wave of Covid, has swept through Europe. The return of the closure and curfew: what is happening

Although the state of emergency signifies the highest degree of coordination, the European Union is once again moving in no particular order, Unable to uniformly apply the Refugee Protection Directive. Indeed, with the Italian transformation, a significantly heterogeneous picture was completed. countries like SpainAnd the CroatiaAnd the Finland And the Holland decide to extend the application of protection to also holders of a non-permanent residence permit, who were obtained for example for study or work, and Germany It has also expanded to include those who have not yet obtained permanent residence or international protection in Ukraine. But that’s it. Other countries, waiting list Italy, preferred to apply their national law to non-Ukrainians, entrusting people unable to return to their country of origin Long time frame and uncertain outcome of the asylum application process. However, only a few countries seemed to oppose the European Commission’s initial proposal, which proposed providing protection for all people fleeing Ukraine. And those who, on the eve of the Council of the European Union, said they were ready to vote on the exclusive proposal of the Commission, It was possible to extend the application of protection at the time of transportation of guidance. but not. what if BelgiumAnd the CyprusAnd the GreeceAnd the MaltaAnd the Norway And the Slovenia They stopped at the categories expressly defined by the council, namely Ukrainians and holders of international protection or its equivalent, and several countries that decided to apply the directive restrictively.

in countries like SwedenThe SlovakiaThe LithuaniaL’Estonia and the Bulgariabut also in . format Poland and in FranceThe legislation conveying the directive often does not cover even non-Ukrainian citizens, and mentions at most those who have already been refugees or other holders of protection in Ukraine. Not even me permanent residents, a marginal and elitist category, but explicitly mentioned by the Council, that falls within the decisions taken by the majority of European Union countries. In fact, the applied French law explicitly speaks of “one-to-one interviews in the province” to really prove that he cannot return to his country of origin. emphatic position Forcible return of third-country nationals displaced from Ukraine at the Ventimiglia border It’s accusations AI Who accuses France today only of unequal treatment between Ukrainians and Afghans. “Unfortunately, the Ukrainian crisis proved to be a bubble, and not a change of pace on the part of Europe in immigration and asylum policies”, explains Professor Faveli. Which confirms the contradiction: “It is precisely in the wake of solidarity with the Ukrainian population that the Immigration and Asylum Pact, which has been under discussion in the European Parliament for some the time. But the measures contained in that charter All this is the result of the logic of scarcity of cooperation and lack of inclusion: The agreement specifically tends to support the kind of approach that governments have emphasized on this occasion as well.”

See also  Here's how it's possible (according to science) - Corriere.it

Ignoring the EU Commission’s guidelines on application of the directive – “the Commission encourages member states to use its discretion and to include broader categories of people in its implementing legislation” – it remains to be seen how national legislation will apply to those displaced by conflict who are not covered by EU temporary protection. In Poland, to name a few, the country that has seen the entry of most of the displaced from Ukraine in recent years Accepted asylum applications in the first instance did not exceed 16 percent. In the second case, the rejection rate was 99 percent. The Commission wrote again on 17 March: “If Member States elect to provide another appropriate form of protection pursuant to Article 2(2) of the Council resolution, such protection shall be consistent with the guarantees of the Charter of Fundamental Rights and the spirit of the Directive, and human dignity shall be guaranteed in all the times “. As for people who will be covered by return assistance, the committee recommends Issuance of time-limited national permits to allow these people to access essential services. All the things that could have been determined by the EU Council decision, which instead adds ASGI’s Bellocchio, “not even states have shown that they know how to solve them internally to avoid problems that would be encountered in the selective application of protection generation”. And in this movement, in no particular order, states seem to refer more often to the countries of Visegrad than to the direction of the European Commission.

Did Iran try to kidnap a reporter in New York?