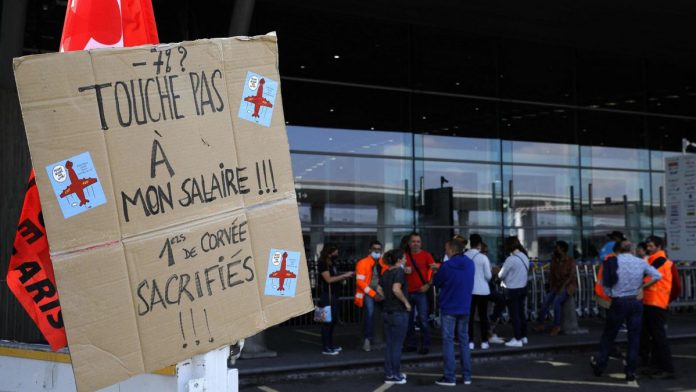 Friday, the protest led to flight delays, 500 protesters barring passengers in Roissy, then blocking traffic. The strike against wage cuts for employees of the ADP group, director of Roissy Charles de Gaulle and Orly airports in Paris, continues on Saturday, but the protesters, under the supervision of the police, did not disturb air traffic. During the morning, a hundred employees quietly walked into the parking lots of Terminal 2E in Roissy, to the sound of a bang under the close supervision of police officers. They were waiting to be joined by another hundred protesters who had gathered elsewhere.

However, many of them have been fined for “obstructing the airport’s work” and “unjustified presence at the airport”, following a decree from the governorate. They were fined 135 euros. “This is the administration’s way of having a social dialogue. This is submission and intimidation, and we will be challenged,” Yuan Q. criticized. , 43, including 15 with ADP firefighters.

Three unions – Unsa, CGT and CFE-CGC – are calling for a strike through Monday to get the Contracts Work Adjustment Scheme (PACT) to be withdrawn, which provides for bonus cuts or cancellations. In the event of refusal, employees run the risk of dismissal. Management members “make us look special. I have 1,680 euros of basic salary, so the rewards are our salary,” added Yuan S., who refuses to lose up to “300 euros” a month.

A source at the airport said that there was no disruption to air traffic on Saturday. She said a few dozen employees gathered in Orly for a public meeting. Negotiations between management and unions have been suspended and are due to resume on Monday. The UN agency also filed a new strike notice on July 9.

Management ensures that a plan of action for change is necessary to achieve savings, while the pandemic has affected the activity of ADP, which is primarily owned by the state. A Collective Contractual Termination Agreement (RCC) was already signed in December, providing for 1,150 employees to leave in 2021, including 700 who were not replaced. Even if air traffic is gaining momentum in Roissy and Orly as departures begin during the holidays, it remains well below its pre-crisis level, with 100,000 passengers per day versus 200,000 previously.