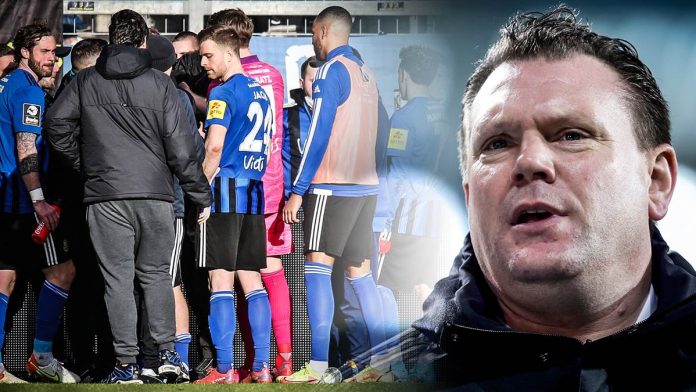 A bitter defeat at home and then a lot of trouble with the fans: 1. FC Saarbrücken will not soon forget the 0-1 draw against Victoria Koln in the third division on Saturday. After the final whistle, frustrated fans stormed the field and confronted the team. “What always frustrates me the most is that it always seems as if we weren’t a ready-to-go group,” coach Uwe Kochinat said visibly annoyed. Magenta Sport.

The 50-year-old was so happy before the match against the relegation favorites that more spectators were finally allowed to play again. “We have pushed our limits in many matches with the help of the masses. Koschinat said so I assumed there would be an idea of ​​unity here We don’t need fans to win matches. That’s why my naive hope was that the fans would accompany us in difficult times, but perhaps this is not true for everyone these days.”

In front of 6,419 spectators at Ludwigsparkstadion, a goal by FCS defender Dominic Ernst (7th minute) decided the match. Thus Saarbrücken missed the jump to the top three in the table and lost their first home defeat in over 100 days.

In a heated exchange of words after the match, Koschinat read the act of hooliganism to an unhappy fan, but later tried to be objective. The experienced coach explained: “Of course there are a lot of emotions in football and the disappointment is very big. Then maybe the fan would have no other choice but to let them out that way.” At the same time he criticized: “There are very strong groups that consider themselves much more important than the club.” Ultimately, as a professional and coach, you have to deal with this situation.

Captain Manuel Zeitz also found the fans’ reaction “totally exaggerated: I also know it wasn’t a great match from us and definitely different than we imagined. But to present the team here as if we were the absolute idiots. Also, a complete failure is the wrong way.” He also noted that Saarland are only playing in the third division for the second year – “and I think it would give us a lot of humility at Saarbrücken at the moment”.