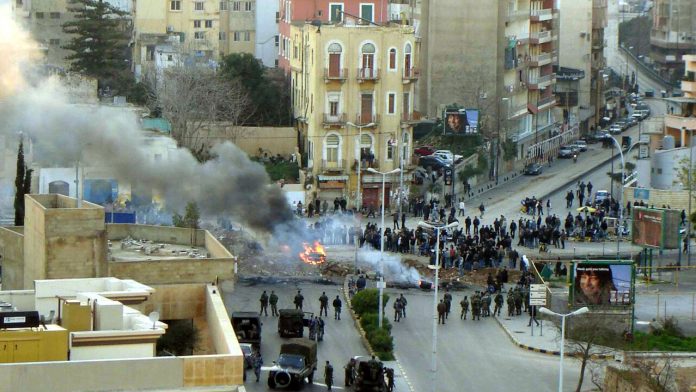 Shots were fired during a demonstration in the streets of Beirut, the capital of Lebanon, in which at least six people were killed and thirty were wounded. This is the outcome of a day of terrorism in the Middle East. All this happened during a demonstration organized by the Shiite groups Hezbollah and Amal to protest against Tariq Bitar, the judge who will decide the fate of the trial of the destroyer. Explosion August 4, 2020 In the port of the Lebanese capital, her video spread around the world. According to the protesters, the judge is biased and wants to politicize the ruling. In fact, during the procession, gunmen and snipers began firing into the crowd, causing a bloodbath.

The Lebanese army announced the arrest of nine people from both sides, including a Syrian, following the bloody clashes in Beirut that left 6 people dead and 30 others injured. Hezbollah and Amal claimed that they were Christian snipers who were shooting at demonstrators and accused the Lebanese Forces party, which is Christian. It is not a lightning strike in the open, because since the beginning of the investigation it has been a continuous escalation until today. The first shots were fired in the afternoon in the Tayoun neighborhood not far from the courthouse.

“The climate in the city is very tense and there are many soldiers scattered in different areas. Yesterday evening we imagined such a scenario, that I was asked to stay at home and some schools were closed as well” called Oliviero García, a dedicated lay person from the Focolar movement, who works for the Vicar Apostolic Latin in Beirut, the capital of Lebanon.

“I went to work anyway even though they warned me not to go there because of potential tensions,” said Garcia, a 42-year-old Paraguayan national who has been in Beirut and the previous seven in Jordan. “I went straight out of town but then had to hurry back as soon as the TV started showing pictures of the clashes.”

Meanwhile, the press also stopped. “We regret to inform our readers that due to circumstances beyond our control, we have temporarily suspended updating our site.” This is how the Lebanese newspaper The Daily Star indicated on its front page, referring to the events taking place in Beirut.

Vaccines: Moldova “Don’t Scare” with Black Humor in the Video –...