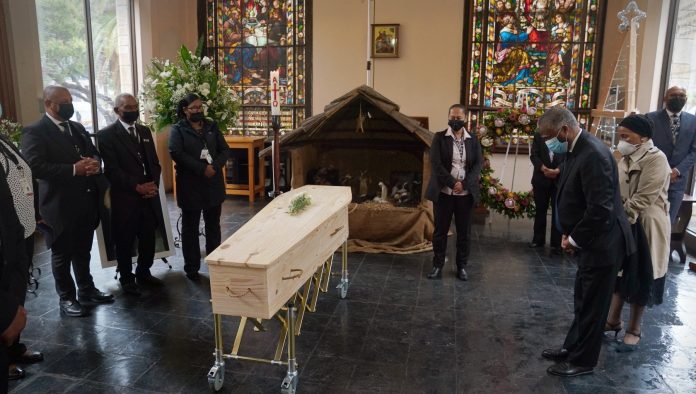 South Africa bids farewell this morning to Archbishop Desmond Tutu, the national anti-apartheid hero who died at the age of 90 on December 26. Tutu was known for being modest and shy, leaving provisions for the ceremony to be simple, the coffin as cheap as possible and for anyone who wanted to donate to charity rather than buy flower crowns.

The funeral was held at St. George’s Cathedral in Cape Town, where Tutu presided when apartheid was still in place in South Africa: From this pulpit, the Anglican archbishop for years denounced the white minority system that discriminated against the black majority. of the country from 1948 to 1991.

Archbishop Desmond Tutu’s body will be liquefied or subjected to a chemical process that is an ecological alternative to cremation: BBC.

This was “what he was looking forward to as an environmental warrior,” said Reverend Michael Widder, dean of St George’s Cathedral in Cape Town, where the state funeral of the anti-apartheid icon and Nobel Peace Prize was awarded.

Farewell to Desmond Tutu, the landmark 1993 anti-apartheid declaration: ‘We will be free’

According to the so-called “hydration” or “hydroburn” technology, the body is “dissolved” in a solution of potassium hydroxide at a temperature of 93 ° C in a process called alkaline hydrolysis, which lasts 3-4 hours. Eventually the bones, which are turned to dust and delivered to relatives of the deceased in a jar, and the fluid from tissue dissolution — devoid of DNA — are dumped into the sewers.

This process is more environmentally friendly than cremation because it consumes less energy and produces no emissions.

Lebanon, in Beirut, a minute of silence in memory of the...