Persia Digest
Home Economy The first rounds in the water of the largest liner in the... 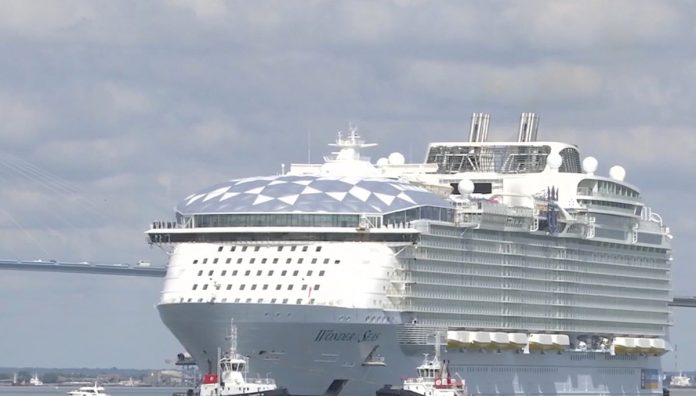 Off Saint-Nazaire, on Friday, August 20, Marvel of the Seas tasted the sea for the first time, an outing that is part of a series of technical tests before the ship is handed over to the customer, an American shipowner.

Many came to admire the technical prowess. After wading in the waters of the Loire, the “Wonder of the Seas” streaked on the ocean waves. Built in the Chantiers de l’Atlantique in Saint-Nazaire, this giant of the seas is 362 meters long and reaches a height of 20 floors, finally leaving the nest. For three and a half days, 500 technicians on board will conduct a battery of tests in order to push the liner to its limits.

“We will turn it on and off in extreme conditions,” says Jean-Yves Gawain, COO of Chantiers de l’Atlantique. And for good reason, the “Wonder of the Seas” needs 2 kilometers to stop, so it is necessary to check its performance.

The ship, which has a capacity of 7,000 passengers, was launched in September 2020 during the transfer of the dock. Built for three years, it won’t be delivered until November 2021 to its US owner Royal Caribbean Cruise Line (RCCL). After that, the “Wonder of the Seas” would have to reach Shanghai (China), its original port for commercial exploitation throughout Asia.