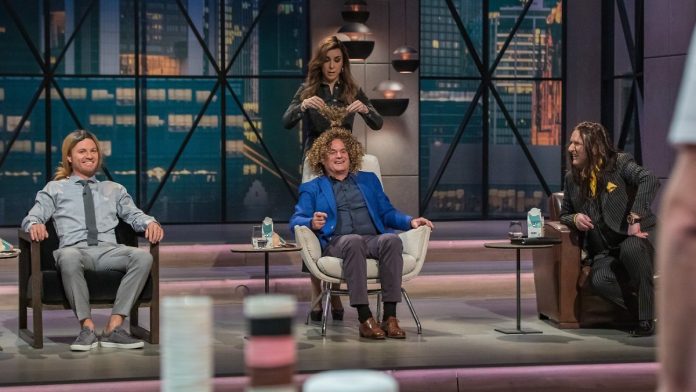 The initial sequence for the new “The Lion’s Den” season is centered around environmental awareness. In addition to the scooter bag revolution, Black is happy to have (almost) plastic-free hair ties and a reusable system for shipping boxes.

The eleventh season of “The Lion’s Den” falls before the first throw with the door in the house. Already in a three-minute clip, the successful startup formula boasts records, innovations and interesting guests. The first excitement did not last. With “Steppkes” co-founders Karl Fischer and Leander Mellies, the duo presents the youngest in the history of the format itself.

The two 17-year-old fans aren’t causing a stir in the lion’s den just because of their age. With a backpack holding the “2 bag” of the bike they brought with them, the young inventors from Aachen made the mark. Little by little, investors are getting wide-eyed. In the end, all the existing lions – Judith Williams, George Koffler, Nils Glago, Karsten Machmeyer, Ralph Demmel – compete for the services of Karl and Linder. After two intense deliberations, the founders finally decided in favor of Nils Glago: “Yes, we’ll make it really big!”

“We should take 49 percent together…”

The latter is also allowed to jump out of his chair at the opening of the new season, beaming with glee. After introducing the “Easiest Table in the World” (“LAIK”), Ralph DeMille and his colleague George Koffler are already very close. Here, however, the meeting still failed because the company’s valuation is “too high” (about 3.5 million euros). “We have to take the 49 percent together for that to make sense,” George Koffler explains. Shortly thereafter, however, the DS chief clenched his fists.

FAIRHAIR founders Fabian Frei and Wolfgang Schimpfle, who came around the corner with wild wigs and hair bands made of organic cotton (the headbands are made from 88% organic cotton and 12% recycled plastic), perfectly fit into the Hanseatic prey scheme. There is still one question that needs to be clarified before the deal is shaken up: “Can you also do this in a complete version without plastic?” Ralph DeMille wants to know. The two founders showed every thumbs up: “We are already working on it, and we will definitely get it done,” replied Fabian Wolfgang. So a loud “Yes!” Through the lion’s den. stupid deal!

Frustration in a “fruit beer” paradise

The joy is great. The peak of the first episode has not yet been reached. After the “fruit beer and beer brothers” Clemens August von Frieden and Michael Statmann, who sadly passed away empty-handed, Philip Bondolic and Michelle Reed, who are allergic to packaging waste, present themselves before the curious eyes of lions: The founders claim: “The question of materials must be dealt with Reusable again.

The Germans send out 37 billion packages annually. With the reusable “SendMePack” system for shipping cartons, this number should be significantly reduced in the future. The promising and scalable big picture makes all the lions on the scene. Suddenly two groups of investors are chatting in a background model. Shortly thereafter, Michelle and Philip spoiled the choice. Who can join the SendMePack boat?

In the end, it’s Judith Williams, Carsten Machmeyer and Dagmar Forel who clap their hands enthusiastically. As athletes, George Koffler and Nico Rosberg considered it: “Congratulations on this wonderful collaboration!” George Koffler finally got on the record. Then the lion’s cage is closed. Big Founders, Cheerful Investors: First Trades in the Bag. So it can go on.

See also  Maria Conchita Alonso, against Baby Aguilar for her demand for an antiviral vaccine