Persia Digest
Home World The Politecnico di Milano reveals the secrets of the Kofuns and ancient... 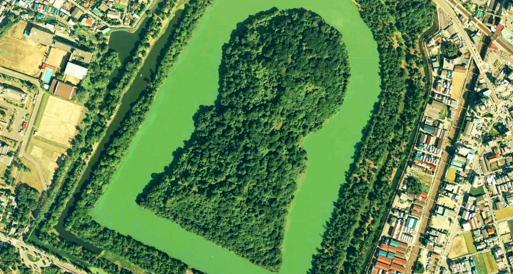 The Japanese islands are dotted with hundreds of ancient burial mounds. This type of study has not been conducted in Japan due to the large number of archaeological sites and the fact that access to these areas is usually forbidden.

Ancient Japanese tombs were oriented toward the arc of the rising sun, a deity that Japanese emperors associated with the mythical origin of their dynasty. to detect it A study conducted by researchers from Politecnico di Milano, used satellite images to conduct an unprecedented study in Japan, due to the abundance of archaeological sites and because access to these areas is restricted.

Lead the research team Giulio Magli, astrophysicist and archaeologist, specializes in the study of the relationships between the architecture of ancient civilizations, the landscape and the celestial vault and has conducted his research from Egypt to Asia: Three years ago I had already done a study on the tombs of the Chinese Empire – he explains -. They have never been studied from the point of view of connection with the landscape and the sky and we discovered the so-called twisted pyramids, not oriented towards the cardinal points. This year we studied the ancient Japanese burials that the imperial family attributes to their ancestors, they are inaccessible sites, you can’t get into the ocean, and it was normal to study them via satellite and it hasn’t been done before.

The university announced that the study, conducted by Magley with Norma Parata and Ariana Picotti in the Department of Mathematics, was recently published: hundreds of these burial mounds dot the Japanese islands, the largest of which are shaped like a hole in a lock. They are called Kofun. Built between the 3rd and 7th centuries AD, the most impressive are attributed to the semi-legendary early emperors, while the smaller ones must belong to court officers and members of the royal family. Among them, Daisen Kofun is one of the largest monuments ever built on Earth: It is 486 meters long and about 36 meters high. It is traditionally attributed to Emperor Nintoku, the 16th emperor of Japan. Daisen also belongs to the group of tombs that were recently included in the UNESCO World Heritage List. There are no written sources for tombs, excavations are rare and limited to the smallest, the largest being the tombs of the first semi-legendary emperors, and therefore strictly protected by law. Protection also extends to the outside: many monuments are fenced off and are not allowed into the perimeter, which is why it is impossible to obtain an accurate measurement of size or height. Moreover, their number discourages any field investigation. So it is only natural to study them using satellite images, which are simple yet powerful tools.

The research, published in the scientific journal Remote Sensing, explained that using remote sensing, researchers measured the orientation of more than a hundred kofun: the results indicate a strong correlation between the entrance corridors with the arc of the sky where the sun and moon are. It appears every day of the year and shows the huge keyhole-shaped Kofun trend relative to the arc of the rising sun. In particular, Daisen Kofun was oriented towards sunrise at the winter solstice. The orientation of imperial tombs toward the sun is in full accordance with Japanese imperial traditions. In fact, the legendary origin of the dynasty of Japanese emperors is considered to be direct descendants of the sun goddess Amaterasu.

If you want to stay up to date with news from Milan and Lombardy, sign up for free to the Corriere Milano newsletter. It arrives every Saturday in your mailbox at 7 am. Adequate
click here.

Scratch and win, the irregular immigrant wins 250 thousand euros but...

The US Senate has approved a $100 billion investment plan to...