Persia Digest
Home World The Pope drops a newborn and laughs at it: a controversy over... 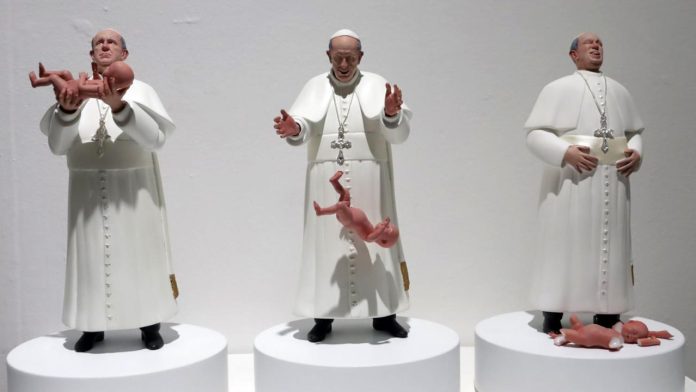 Sculpted in three works: the portrait of the Pope holding a newborn in his arms, then dropping him and laughing at seeing him torn at his feet. The artwork of Chilean artist Pablo Mir has caused a lot of controversy. An act of sacrilege, a condemnation of the Catholic Church “which perpetuates – according to the author – a violent and outdated model”.

“Welcome to Tradition,” is the title of the polyresin work, which was shown at the Aguafuerte Gallery in Mexico City. For the trio, Meyer drew inspiration from a work from the 1990s in which contemporary Chinese artist and activist Ai Weiwei took an old ceramic vase from the Han Dynasty and dropped it to the ground, smashing it, as a form of protest against the Chinese. Government. “He made this symbolic gesture to destroy Chinese tradition and I conveyed it, and I put this work in a Western context and imagined the Catholic tradition, a tradition that affects us all in some way because we come from the Western world,” the Chilean artist said in an interview with Efe especially with topics such as pedophilia. .

Meyer also cited the corruption of the Catholic Church in Chile as an example, and recalled that two years ago in her country “cases of pedophilia appeared like never before and people became resentful, at least of the institution of faith.” “We know that all powerful institutions often come from within and there is no need for external factors to bring them down,” continued Mayer, who was born during the Pinochet dictatorship in 1973. “Especially because I have relatives who were oppressed by the dictatorship and I have business related not only to religion, but also to politics, and I play these political games because art and politics are very connected from my point of view and with regard to my work,” he finally explained.