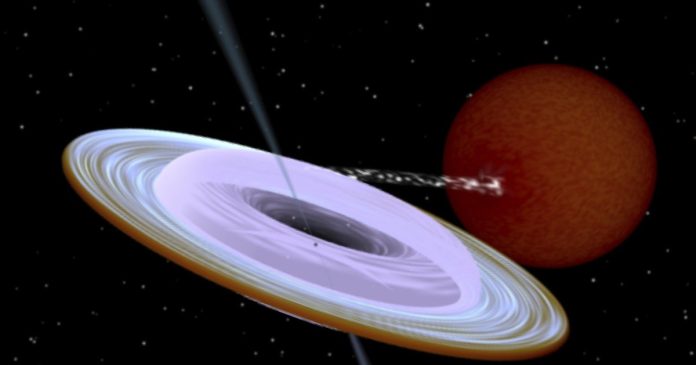 The black hole MAXI J1820 + 070, which is about 10,000 light-years away, is a mystery to astronomers: its axis of rotation is tilted by more than 40 degrees on its orbital plane. This is evidenced by observations made by an international research team using various telescopes on Earth and in space. According to scientists in the journal, it’s the largest angle of inclination observed in black holes so far — and larger than theoretically expected. to know.

MAXI J1820 + 070 is what is known as a stellar black hole: it was formed from a massive star that consumed its nuclear energy supply and threw its outer layers into space in a supernova explosion. The interior of the star collapses into a black hole whose gravity is so strong that not even light can escape. But the material can fall from the outside.

This is exactly what happens when such a black hole forms in a binary star. This is also the case with MAXI J1820 + 070, a black hole with a mass eight times the mass of the Sun. It forms a binary system with an ordinary star, which is believed to be slightly smaller than our Sun.

The black hole rips matter from its smaller partner

Thanks to its gravity, the black hole rips matter from its smaller partner. This accumulates in a rotating disk around the black hole. From there, some of the matter falls into the black hole, but some of it is deflected by magnetic fields and released into space in two parallel jets along the black hole’s axis of rotation.

Guri Potanen of the University of Turku in Finland and colleagues located the MAXI J1820 + 070 rotor using observations made with the Liverpool Telescope in Spain and the optical/ultraviolet telescope aboard the Swift Satellite Observatory. As matter flows from the smaller partner star into the black hole, this also provides researchers with the location of the binary system’s orbital plane. Then they compared these measurements with previous measurements of the direction of the bundles of the collected material.

These rays, also known as jets, are emitted from the black hole’s poles, so they should be roughly perpendicular to the plane of the orbit. But to Potanin and colleagues’ surprise, this was not the case with MAXI J1820 + 070: the jets – and thus the black hole’s rotation axis – are tilted at least 40 degrees against the expected direction. According to the researchers, this is difficult to explain in the framework of the theory of the formation and development of such stellar black holes.

The tilt of the axis of rotation should decrease over time

It is true that a supernova explosion is not symmetric, and therefore can give the emerging black hole a kind of kick and thus tilt its axis of rotation. But you wouldn’t expect such a big mile. In addition, the tilt of the rotation axis must decrease over time due to the flow of matter from the orbital plane of the system.

Therefore, when studying such systems, astronomers have so far assumed that the axis is tilted only slightly – after all. Potanin and colleagues caution that this presents a problem: In particular, the mass of a black hole can be much larger than that estimated assuming a small angle of inclination. The researchers now hope to use similar studies of other black holes to see if large tilt angles are common or the exception rather than the rule.