Persia Digest
Home science Transformed into a robotic bird, this drone can land anywhere and pick... 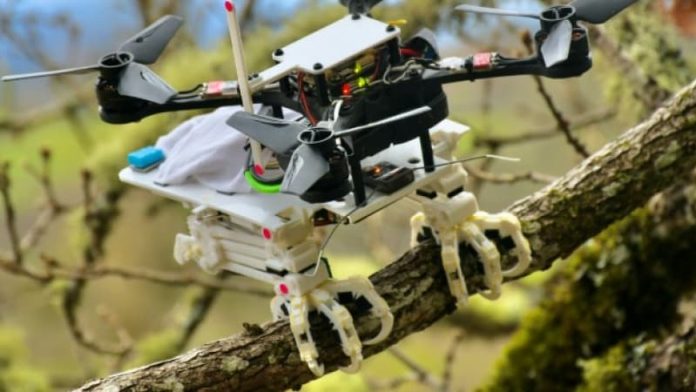 Peregrine falcon-inspired paws and claws equip this drone that can land on a tree to improve its range in flight and capture objects in flight.

A team of engineers from the prestigious American University at Stanford has created a robotic clutch that can be attached to drones, turning the latter into robotic birds capable of grasping objects or sitting on different surfaces.

These new capabilities could allow flying robots to conserve their batteries rather than having to stand still – for example during searches for survivors – or help biologists more easily take samples in the forest.

“We want to be able to land anywhere, which is why it’s exciting from an engineering and robotics standpoint,” said David Lintink, co-author of an article about this innovation published Wednesday in Science Robotics.

As is often the case in robotics, this project was inspired by animal behavior – in this case the way birds land and cling to branches – to overcome technical difficulties.

But imitating these birds, whose millions of years of evolution have allowed them to cling to branches of various sizes or shapes, sometimes covered with lichen or slippery with rain, is not an easy task.

To this end, the Stanford team used high-speed cameras to study how the baby parrots land on perches of varying size and materials: wood, foam, sandpaper and Teflon.

The poles were also fitted with sensors that recorded the force with which the birds descended and took off again. The scientists found that while the landing motion was the same in each position, the parrots used their legs to adapt to the differences they encountered.

To be able to support a small drone with four propellers, the scientists designed grippers based on the model of the legs of the peregrine falcon. The structure, made with a 3D printer, includes motors and fishing line as muscles and tendons.

It takes 20 milliseconds to hook up the mechanism, then the accelerometer tells the robot that the landing is complete. Finally, the algorithm allows the mechanical bird to maintain its balance on the branch. The robot was able to grab objects thrown at it, such as tennis balls, and land in real conditions in the forests of the northwest United States.

Astronomy: How to notice the rare phenomenon that will occur this...

The Legend of Mana: Announcing the Classic RPG Anime Series