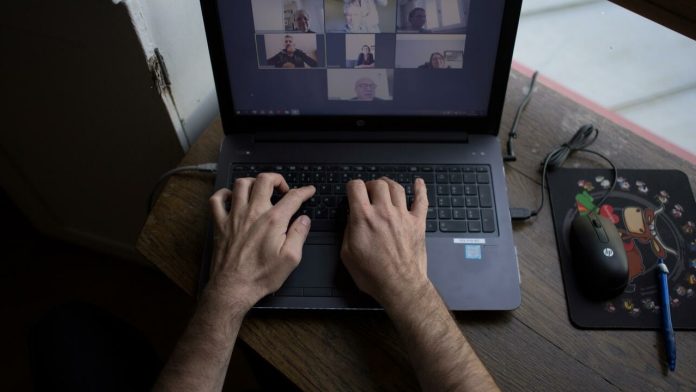 Paris (AFP) – According to a study of 1,500 people around the world published on Wednesday, remote video exchanges, which have become necessary since the explosion of remote work, are hampering the production of collaborative ideas.

During the Covid-19 pandemic, technologies like Zoom, Teams or Skype have enabled millions of employees to hold video and remote meetings.

This hypothetical collaboration may continue, as recent polls have shown that in the United States, for example, 20% of work days will take place at home after the end of the pandemic, confirms the study published in the journal Nature.

Their authors, marketing experts at American universities at Columbia and Stanford, wanted to know the effects of this abandonment of face-to-face interactions on innovation, in other words the ability to generate new ideas during the exchange – “brainstorming”.

They conducted preliminary laboratory tests, with 602 volunteer participants (students) who were randomly paired. The duo were either face-to-face in the same room or separated in two distant spaces, talking to each other over a video call. Each team had 5 minutes to find creative uses for the products – a plate of frisbee and bubble wrap. Then he had to choose his most creative idea.

The experiment was replicated in companies with 1,490 engineers in Finland, Hungary, Portugal, India and Israel: during dedicated workshops inside their buildings, groups were invited to propose innovative products for their telecoms companies.

However, the good news for Zoom, Skype and Teams: when teams had to pick their best ideas, virtual exchanges proved just as productive as head-to-head matches, sometimes a little more.

The researchers concluded that only video calls inhibited creativity, when other skills seemed unaffected.

Screen focus too much

but why ? Previous research has demonstrated a neural link between vision and focus, and has shown that, paradoxically, “people are more creative when they are less focused,” says Melanie Brooks, associate professor of marketing at Columbia Business School and co-author of the book. A study in a video presentation of his work.

To test this, she outfitted her “guinea pigs” with an eye-tracking device. Thus, I was able to verify that the virtual partners spent almost twice as much time looking at each other as their face-to-face counterparts.

Video calls focused attention on a limited space – the screen – which limits the cognitive process of creating. During face-to-face, people shared an entire environment, “more conducive to the bifurcation of ideas that generates new ideas,” the authors developed.

Who suggest not to dismiss virtual collaborations – which have their merits – but to keep them for certain certain tasks, preferring to be in the office in order to exchange ideas.

And not to be distracted by such a group of engineers from Poland, whose company organized workshops in a hotel for a seminar. It was clear that participants were “more interested in the coffee and biscuits served in the hotel bar” than in the experimental protocol, from which they were ultimately excluded.