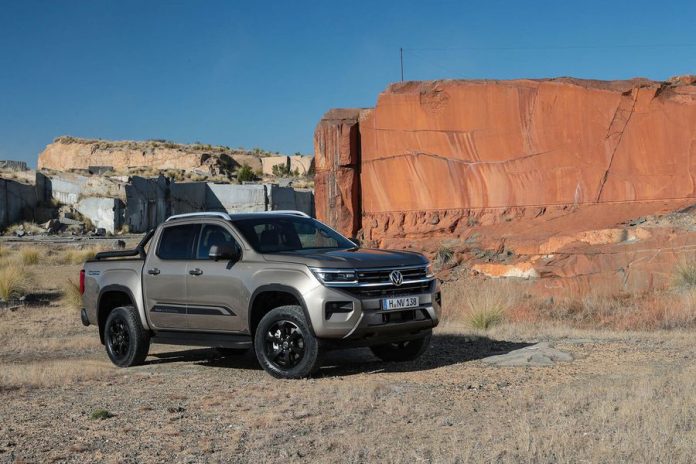 The competitive part of the pick-up is restless. Every day we know something new in this regard and today the paradigm that sets the standard for us is The new Volkswagen Amarok, The second generation that arrives 12 years after the release of the truck, which today records more than 830 thousand units sold.

The Volkswagen Amarok 2023 It’s the technical cousin of the Ford Ranger, planted on the same platform thanks to an alliance between both manufacturers. It is therefore 96 mm longer than its predecessor, and reaches 5.350 mm The wheelbase has also been increased to 3.270 mm (+173 mm) to increase the interior space.

By increasing the wheelbase more than the actual overall length, it means the outriggers have been shortened to improve off-road capabilities, Better approach and launch angles (29° forward and 21° rear).

The second generation Amarok comes in single cab and double cab versions. Thus, the length of the cargo area varies between 2305 mm and 1544 mm, respectively. Volkswagen reports that two European standard pallets (1200 x 800 mm) can be loaded without problems. In this sense, the German truck can now transport payload 1160 kgcompared to the current Amarok’s 935 kg, and has Towing capacity up to 3500kgDepending on the engine.

Volkswagen launches the Amarok 2023 along with a selection of Four diesel engines and one gasoline engine, Deceive energy ranges From 150 hp to 302 hp of the most efficient alternatives. Depending on the selected block, we will find a manual or automatic gearbox.

The access version is represented by the block 2.0 TDI and 150 hpFollowed by an intermediate engine on the same 170 hp engine. Then we find a four-cylinder engine 2.0 TDI biturbo Con 204 o 210 hp.

The most powerful turbocharged engine is A 3.0L V6.0 With 240 hp or 250 hp (depending on markets). In markets where gasoline engines are in demand, Volkswagen will offer a block with 2.3 liters displacement and 302 hp.

Volkswagen Probon Two 4Motion all-wheel drive systems depending on the engine. The first provides temporary all-wheel drive, depending on driving conditions which prioritizes the rear axle, while the second is permanent and is linked to a two-speed electromechanical gear reduction, to increase traction and off-road ability. .

According to Volkswagen, the new Volkswagen Amarok is presented as a “premium and practical” pickup. In this sense, the second-generation truck shows a digital and connected interior, with a dashboard that shares many elements with the Ford Ranger.

So The vertical infotainment system becomes the main protagonist. With a slightly modified version of the Ford SYNC 4, the touchscreen is 10 or 12 inches, depending on the version. It’s located next to an 8-inch digital instrument panel in the most affordable models and 12 in premium finishes.

However, VW has gone to great lengths to separate the Amarok’s interior from the Ranger’s cabin, with things like a uniquely styled leather multifunction steering wheel, center console switches, and gear sticks, as well as materials different from those used by Ford.

On the other hand, the list Driving assistance systems It is equally broad. The most notable technologies are adaptive cruise control, involuntary lane departure warning, lane-keeping assist, emergency braking, and traffic sign recognition.

The new Volkswagen Amarok will be built in South Africa and go on sale in Europe by the end of 2022.

Sodexo has reached an agreement to sell the Parisian nightclub Le...