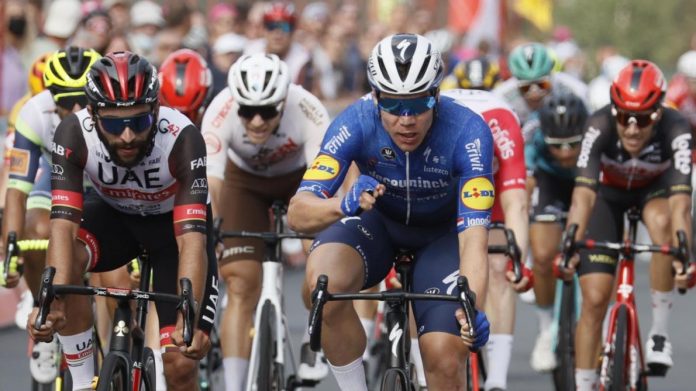 Jacobsen won the second stage of the race ahead of Gaviria and Capote.

TheDutchman Fabio Jacobsen (Deceuninck-Quick Step) raised his arms at the end of the second stage of the Tour de Wallonie (2.Pro). After 30 laps of 4 km at Zolder, he won the race to secure his first victory since his horrific crash on August 5, 2020 at the Tour of Poland. Jacobsen beat Colombian Fernando Gaviria (UAE) and Amaury Cabot (Arkia Samsik).

Returning to competition at the beginning of April during the Turkey Tour after undergoing several operations, particularly on the face, Jacobsen was not yet able to join in to win a final round. On Wednesday, the 24-year-old Dutchman claimed the 19th victory of his career, after winning the Scheldt GP twice (2018, 2019).

Ironically, Dylan Groenwegen (Jumbo-Wisma), who was stopped after causing Jacobsen to fall in Poland, is the first stage winner at Heron on Tuesday.

Initially, this second stage was to be held between Verviers and Hervé. It could not unfold in its original form due to the consequences of floods and the damage they caused. The organizers, having canceled today for the first time, found at the last minute an alternative solution with the Zolder Circuit.

Thursday, the third stage will take place between Plumber and Irisi over a distance of 179.9 kilometres. Having already had to climb five runway climbs, including four of the first category, Peloton will compete for victory on the top of a one-kilometer hill.

The Walloon race, won by France’s Arnaud Demarie in 2020, ends on Saturday with a distance of 192.4 km per day between Dinant and Quargnon.