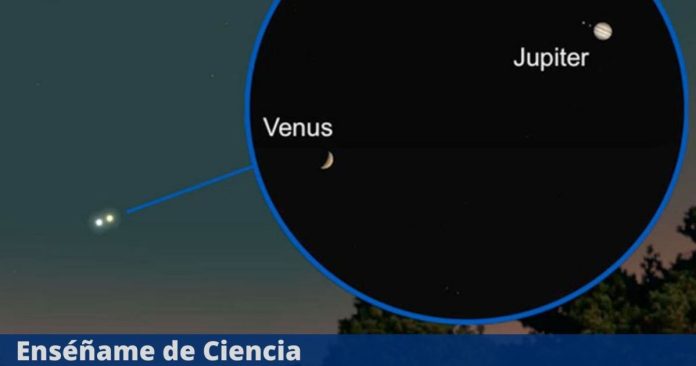 April is coming to a close, but there’s still plenty to see this month. A very nice coupling is formed from April 28 And it reaches its climax April 30; In the days following May, both planets will gradually move away in the sky. You can’t miss it, and here we tell you how to see it.

Conjunction refers to the apparent proximity of two or more celestial bodies in the sky. In other words, they shine very close to each other, although it’s just an apparent position where in reality they are separated by even hundreds of millions of kilometers. Venus is 145.4 million km from us, while Jupiter is 852.8 million km away.

What time do you see? It can be seen from both hemispheres, although the schedule is slightly different. from areas like Chile and Argentina It can be seen from 4:30 AM (time varies a few minutes depending on the region). For observers from countries like Colombia, Peru and Ecuadorthey can start watching from 4:30 in the morning for the northern regions they have little time, Mexico And neighboring countries can expect to see it from 5:30 in the morning

On April 29, they will continue to approach, concluding with flowering on Saturday morning (April 30). Surprisingly, Venus and Jupiter will appear almost as one object in the sky, separated by only 0.2 degrees. The two planets will rise side by side that morning, with Jupiter on the left and Venus on the right. Venus will be bright with a magnitude of -4.1; While Jupiter will shine bright -2.1.

Much of the hemispheres can be seen, although southern observers have a little more luck, as the planets will be visible much earlier (about two hours before sunrise). But in general, you can go out to see an hour before sunrise. Note that celestial bodies will begin to appear gradually, starting with Saturn and finally Jupiter.

You should also take into account the weather conditions. You need a clear sky free of light pollution to enjoy the action to the fullest. The display appears as East and southeast direction. To follow the path of the celestial bodies and the time of their sunrise and sunset, you can help yourself with a program or a mobile application. Here you have a long list of apps for astronomy lovers.

Don’t go yet! After seeing Venus and Jupiter embracing, on April 30 in the afternoon we will witness the first eclipse of the year. It will be visible from southern South America: Argentina, Chile, Uruguay, southern Peru, Bolivia, western Paraguay and a small part of Brazil. If your country is not on the list, don’t worry, you can watch it live online. You can learn more by clicking here.

Without a doubt, this is one of the best shows in the night sky. During this month, we’ve seen conjunctions, planetary alignments of four planets and even constituent shapes of celestial bodies in the sky. But this is only the beginning, as in the middle of the year, five planets with the naked eye are ready to line up and walk across the sky.