Persia Digest
Home sport With his fifth win in C1, Karim Benzema is very close to... 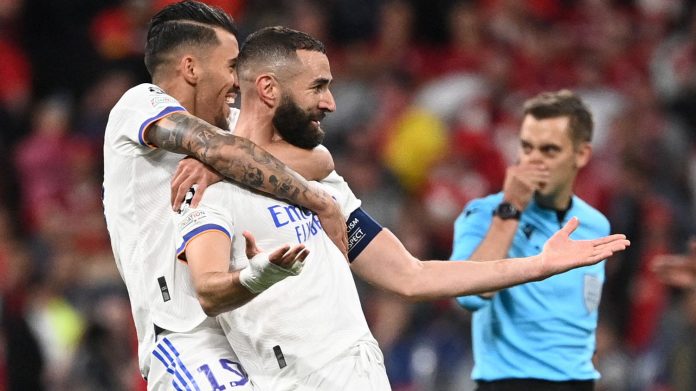 At the final whistle, Karim Benzema raised his arms to heaven. Alone, amidst several Liverpool players, the Real Madrid forward quietly enjoyed the moment. Like a good old habit. He did not have time to do it alone for a long time, because soon the Merengue players, including Marcelo, Rodrygo and other teammates, rushed at him. He, Real Madrid’s best player, to celebrate this new victory in the Champions League, which he got on Saturday 28 May against Liverpool (1-0) at the Stade de France.

As with his first four successes in the competition, the task of raising the big-eared trophy did not fall upon him. It was Marcelo, captain but substitute, who took charge of making the 20,000 Madrid fans present at the Stade de France scream with joy. but whatever. All eyes are on him, because Benzema knows it: a prophet in his country on Saturday evening, he can rule alone on the surface of world football.

On October 17, at the Théâtre du Châtelet, he will have every ability to raise the Golden Ball as he pleases. Because the latter now seems promising to him. The author of a huge season (46 games, 44 goals, 15 assists), the French international, at 34, at the top of his level. La Liga winner this season, this Champions League is also and above all his own. Although he did not achieve his greatest performance at the Stade de France on Saturday.

The Frenchman thought for a moment that he opened the scoring a few minutes before the end of the first half, before seeing his goal nullified for offside. He is his student this season, Vinicius, the reckless and clumsy Brazilian, but he has made tremendous progress this season thanks to the wise advice of “KB9”, who provided Real. But thinking about the trajectory of FC Madrid, how can we not stress the leadership role of Benzema? Without him, Real Madrid would not have made it to Paris.

Three goals against Paris Saint-Germain in the second leg of the round of 16, four goals against Chelsea in the quarter-finals, three against City in the semi-finals. Benzema has commanded the Champions League this season – top scorer with 15 goals in 11 matches – ruling world football for several months. By winning the Champions League for the fifth time on Saturday night, he is one win away from Francisco Gento’s record and joins legends of the game such as Paolo Maldini, Alessandro Costacurta, Alfredo Di Stefano or Cristiano Ronaldo.

See also  Formula 1: Sebastian Vettel does not want to be vaccinated against Corona - "It is about the principle"

He can now join Raymond Kopa, Michel Platini, Jean-Pierre Papin, Zinedine Zidane, and other French Ballon d’Or winners. This shows how much Benzema has accomplished this season. Since returning to the Blues a year ago to compete in the European Championship, the Real Madrid striker has taken on a new dimension. Benzema is fully satisfied, in addition to his physique despite his advanced age for a footballer (34 years), it is untouchable.

“We deserve our victory (…) There is no chance”

Who can compete with him today when he was the favorite before this final? Sadio Mane and Mohamed Salah, his main rivals, failed on Saturday night to win the Champions League for the second time. Salah found a huge Courtois. And in case of doubt, let’s not forget that votes could be dispersed between Salah and Mane, which would play into Benzema’s favour.

“The Ballon d’Or? It’s obviously in the back of my mind. There, I’ll go for selection. At the club, I couldn’t do a better job.”At the end of the meeting, the attacker said in front of the Canal + microphone.

So the final reward could arrive on October 17th. Until then, Benzema will still have the opportunity to assert himself as the best striker on the planet, alongside Kylian Mbappe. Before discussing with him, not at the club but at the selection, the last major goal of his formidable career: the World Cup, which begins on November 21 in Qatar. Winning it would cement his status as a legend in French football.