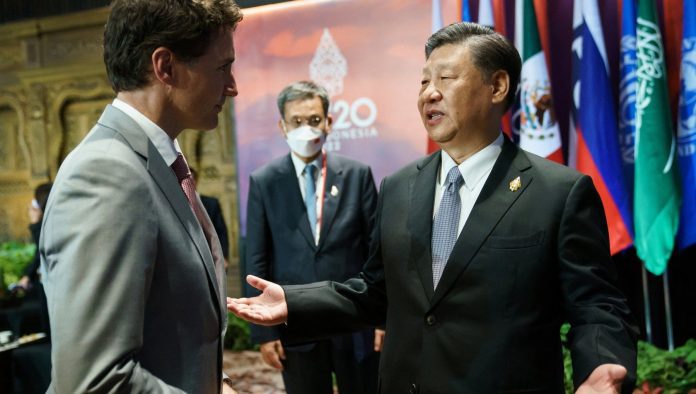 BEIJING – “Everything we discussed yesterday was leaked to the newspapers. This is not appropriate, this is not the way the conversation went.” it’s a Xi Jinping Rather disturbed by what Canadian television cameras filmed in the corridors G20 in Bali While Yum frequently scolds the Prime Minister Justin Trudeau. It is very rare to see a Chinese leader like this. The two men met yesterday for a brief 10-minute bilateral meeting during which the Ottawa leader raised “serious concerns” about Chinese infiltration into Canada.

Cdn Pool Camera captured a tough talk between Chinese President Xi and PM Trudeau at the G20 today. In it, Xi expressed his displeasure that everything discussed yesterday “was leaked to the newspaper(s), it’s not appropriate… and that’s not how the conversation was conducted.” pic.twitter.com/Hres3vwf4Q

“We believe in free and open dialogue. I will continue to work constructively, but there will be things we disagree on,” Trudeau replies. “If you’re sincere, we can communicate. Otherwise, it’s difficult. Let’s create conditions first,” the Chinese leader replies before shaking his hand slightly nervously with a narrow half-smile on his face and leaving.

The two had not met in over three years. Relations between China and Canada have been very tense since 2018, with the arrest of Lady Huawei in Vancouver, and the subsequent arrest, on charges of espionage, in China, of Canadian citizens, Michelle, Kovrig and Spavor, who were released last year.

See also  Terrible doubt who this man is - Libero Quotidiano

Russia is ready to disconnect from the global Internet: “Get ready...

Lebanon: Aoun leaves the presidency, the country is in a vacuum...