Persia Digest
Home sport 4-0 in Kuopio PS: Al Ittihad shines when it returns to the... 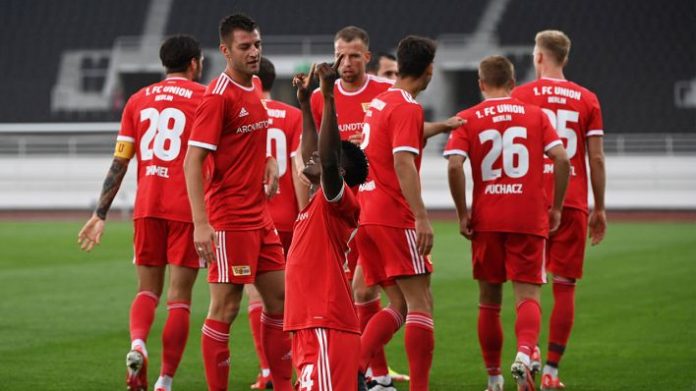 
Al-Ittihad shines when it returns to the European stage

1. FC Union can plan the group stage of the Europa Conference League after the first leg of the play-off. In Helsinki, Köppnecker beat Kuopio PS 4-0 (3-0). Above all, it was a paddle evening.

The first half sparkled – then succeeded with confidence: after winning 4-0 (3-0) in the first leg of the Coupe PS, 1. FC Union came close to entering the group stage of the European Conference League. Returning to the European stage after 20 years, Taiwo Ounii (7/31) and Max Kroos (29) met at the Olympic Stadium in Helsinki before the Köppnecker break, and Andreas Vogelsamer scored the final score (90 + 2).

The start couldn’t be better for 1. FC Union. It took just seven minutes for Berlin to lead 1-0 through Taiwo Owenyi. It was an early statement – and a highlight of play at the same time: with Timozis Bochacz and Max Kroos, the Köppenikers combined on the left side in a dash to the front and competitive starter Bochucks was perfect for goal Ouni. Kuopio goalkeeper Johannes Creedel never gave him a chance from close range.

The Federation then initially allowed the Finnish hosts to play, but without giving up control. Do not underestimate your opponent, Urs Fischer has repeatedly preached – and his players showed exactly the focus and seriousness that their coach demanded. Puchacz nearly scored 2-0 on his own after ten minutes of a crucial pass. Kreidl was able to dodge a pole skew (16th place).

The difference in quality was evident on the pitch – and shortly thereafter on the scoreboard. Because the union added twice in a very short time. The Berlin team twice forced the Finns, who were exhausted, to make mistakes while building the game. Soon they met forward twice. And twice they locked up the cold snow. Focus: The Storm Duo from Kopenic. First Max Kruse met from a half-right position after preliminary work for Awoniyi (29), two minutes later – in reverse innings – Awoniyi of the turn after a pass from Kruse (31).

So the score was 3-0 – and Al-Ittihad after half an hour at the Olympic Stadium in Helsinki with more than one match in the group stage of the European Conference League. It was justified reward for the strong performance and the occasion for a festive atmosphere among the approximately 500 Etihad fans. While the celebration was off, the team took it easy. Not much happened until the break.

This did not change after the break. It was now a duel largely without lights. Because the federation no longer has to and Kuopio no longer can. Roughly an hour later, Urs Fischer knocked Auney and Kroos off the field – and the team remarkably turned up the pace for the upcoming league game in Hoffenheim (Sunday, 3:30 p.m.). The Finns tried once or twice their way forward, and also entered the penalty area – but ultimately failed miserably.

Until the 90th minute when Union took a deep breath for the first and only time after Toifumaki hit the crossbar. But Köppnecker set the pace again: substitutes Cedric Teuchert and Andreas Vogelsamer took the lead and the newcomer from Bielefeld hit the net (90 + 2).

So the match ended 4-0. The match winner didn’t want to be the center of attention afterwards, despite his two goals and the mold: “It was a good match from me, but also from the whole team,” Taiwo Aouni said. The 24-year-old also warned of the ecstasy: “It’s not over yet. We have to finish it in Berlin.”

However, the starting position for the return leg on August 26 (8:15 p.m.) at the Olympic Stadium is clearly more than comfortable. Berliners can look forward to the next day – without being snooty. Then the group stage of the European League will be held in Istanbul. Köpenickers will be in the lottery bowl. Anything else would be a great Finnish football miracle after this first leg.