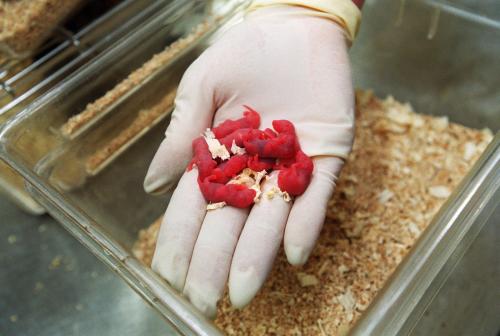 come are convinced that one day humans will have to leave Earth and live on another planet. But one problem will arise (among others): the atmosphere of the blue planet will no longer protect these adventurers from space radiation. So interested researchers wondered whether this radiation could affect in the long term the reproductive capabilities of humans, as well as the animals that would accompany them in their new lives.

To answer this question, a large-scale scientific experiment was launched, the results of which, published Friday in the journal Science Advances, are somewhat reassuring.. After spending nearly six years in orbit on the International Space Station (ISS), freeze-dried rat sperm has already been able to give birth to a group of healthy mice.

includes space radiation” Solar wind and cosmic rays They emit from the sun or from outside the solar system, which we know can damage DNA. But according to the researchers, ” Freeze-dried sperm could theoretically be stored on the International Space Station for about 200 years It’s without a problem, said the lead researcher on this work, Teruhiko Wakayama, a professor at Yamanashi University in Japan.

The project began in 1997. Teruhiko Wakayama, who dreamed of being an astronaut and was a voracious reader of science fiction, demonstrated for the first time with his team that mice can actually be born from freeze-dried sperm. This is a practical requirement: in this form, samples can be stored at room temperature for more than a year. Otherwise, they would have had to send them to refrigerators not available on board the missiles.

Years later, the researchers collected semen from 12 mice, and put them into six small boxes each containing 48 vials., no larger than a pen. Three of these boxes remained in Japan for comparison, and three of them took off to the International Space Station in August 2014. On board the station, astronauts placed them in refrigerators at -95 degrees Celsius.

Then the researchers observed the sperm DNA. ” When measuring DNA damage, there was no significant difference between samples kept in space for three or six years, or those kept on Earth. Teruhiko Wakayama explained.

Once the eggs are fertilized, from ” Light »However, chromosomal abnormalities have been detected for sperms that have spent years in zero gravity. But this damage did not affect their development.

In fact, the embryos were grown in a laboratory, and then some of them were transplanted into female mice. In all, 243 mice were born from sperm that stayed in space for about 3 years, and 168 of those that stayed in space for about 6 years. ” Looking at the birth rates of these embryos, there was no difference between those preserved on Earth or in space, whether they were 3 or 6 years old.Teruhiko Wakayama Gallery. All the young ones were normal in appearance (…) and no abnormalities were found. »

See also  How much is Ghost of Tsushima DLC on PS5?

Five samples born from sperm that spent 3 years on the International Space Station throughout their lifespan were studied. The researchers found that life expectancy is slightly lower than life expectancy. But these results must be confirmed by the study, which is still underway on other samples, produced on its part by sperm that have spent almost 6 years in space.

Finally, the “space mice” were mated, giving rise to new specimens, which in turn produced a third generation. ” All descendants are found to be normal “, according to the study. For its co-author, these findings are” Positive for the long-term conservation of genetic resources Instead of taking many weary live animals with them, Humans who migrate to another planet, in order to prevent inbreeding that leads to degeneration, can dispose of freeze-dried spermTeruhiko Wakayama explained.

However, the altitude at which the International Space Station orbits (400 km) still benefits from Earth’s protective magnetic shield. Moreover, the radiations are more intense, so additional experiments should be conducted there in the future, the researchers judge.