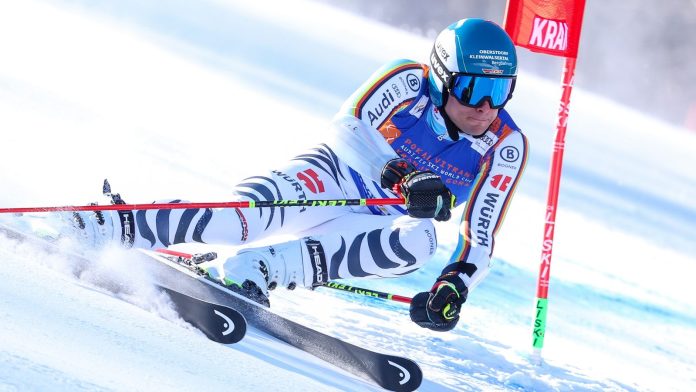 Alexander Schmid got another chance on the podium in his last appearance at the 2021/22 Winter World Cup. He was allowed to start the second round of the Giant Slalom final in Méribel from ninth place. The man from Allgäu was only 0.39 seconds behind in third. His legs sure hurt, as he revealed in a ZDF semi-final interview. But he wants to race again, as he has in the past few weeks.

The SC Fischen ski racer only managed this to a limited extent. Because in the last section he lost a lot of time. Thus he finished 18th in Méribel, more than two seconds behind winner Marco Odermatt (Switzerland). Udermatt won ahead of Norway’s Lukas Brathin (+0.49 seconds) and his compatriot Loic Millard (+0.63 seconds). Now that wasn’t the last round I wanted,” said a dejected Schmid.

The podium in Alta Badia and the Olympic silver in Beijing

So the race was a little season-appropriate for Alexander Schmid. At 27 years he has always been on the podium. But in the end he managed to take third place only once: at the end of December in Alta Badia.

Nevertheless, Schmid was once again convincing in almost all races as one of the best giant slalom drivers in the world. The only exceptions were the failure at Adelboden in January and the Olympic race in Beijing. But he made up for this predicament. Regardless, one must not forget that Schmid played his part in winning the silver medal at the Beijing Winter Olympics. With the team, the Germans took the podium.

So 2021/22 should be considered a successful year. And in the new season, he will also receive reinforcements in his discipline: Bolsterlanger Stefan Luitz will return to the World Cup Circus after a herniated disc.

Odermatt was actually the small crystal ball winner in the giant slalom. The World Cup as a whole also arrives for the 24-year-old ahead of Sunday’s final slalom (From 10:30 a.m. on the BR24 sports live broadcast tape) no longer take. Then Linus Straßer of TSV 1860 Munich will fight for the little crystal ball in his specialty in the last men’s race of the season.