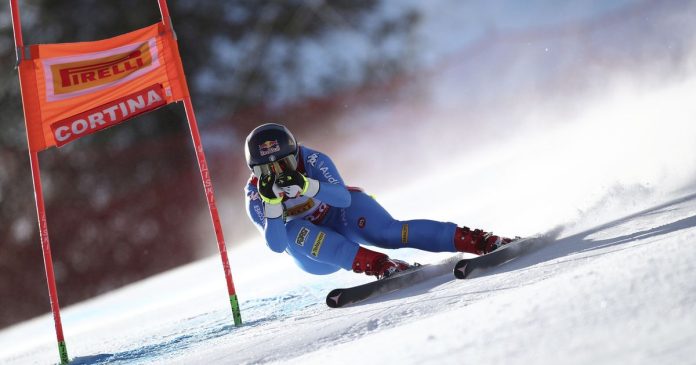 Unsurprisingly, and despite a huge mistake, the formidable Sofia Jogia won the (shortened) descent of Cortina, her sixth success of the winter, ahead of Ramona Seppenhofer and Ester Ledecka. Corinne Sutter was ranked fourth, only seven hundredths from the podium. Michel Jessen (6) and Lara Gutt Bahrami (9) are in the top ten.

The victim of a stunning fall a week ago at Zochenense, Sofia Jogia resumed her run forward to claim her fourth win in 5 contested rounds this winter. The 29-year-old Italian now has 17 World Cup successes to her name.

However, Sofia Jogia didn’t get it wrong in this descent race, cutting about 30 seconds off the race and several key lanes. But she was still able to show her confidence and speed to overtake Austrian runner-up Ramona Seppenhofer, by 0.20 seconds.

Corinne Sutter for her part got 0″ 33 on the Italian. Schwyzoise was pushed off the podium by Ester Ledecka, who won her first podium of the winter in alpine skiing.

On the break the previous weekend, Michele Gezen made a convincing comeback by finishing sixth at 0”44. However, Obwaldenian, who has stayed in two consecutive slalom eliminations, could have done better: Seconds to 0″ 03 by Sofia Jogia after 49 inches, she made a restrictive foul at the bottom of the course.

See also  Ways to Accelerate Your Career in the Sports Industry