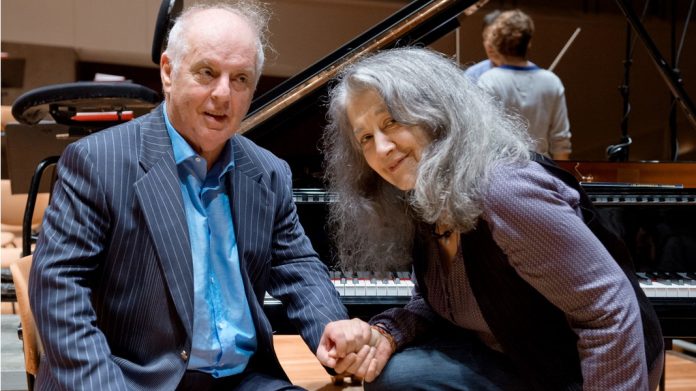 As soon as you step up the little hands in slow steps, your heart opens. Barenboim and Argerich have known each other throughout their musical lives. For more than 70 years in Buenos Aires, they have played together as children, first under the grand piano and then on the grand piano. The audience goes along that evening and gratefully accepts every gesture, every smile, and every unexpected occurrence – for example when the two have to pass a minute to find the correct notes for Mozart’s “Andante with Five Variations”, or when they exchange places several times on the last piece, which is something A bit tired. Two old friends make music – and we can watch it. The concert hall is full of appreciation and gratitude.

First, the two are seated opposite each other on two grand piano and allowed to blend in Mozart’s tones and resonances with each other in a sonata for two piano in major D. While Claude Debussy’s “Prelude à l’apres-midi d’un faune”, which Argerich and Barenboim played together in Laeiszhalle and now added back to the program in a short time, remains a rich pedaling soundscape, you can feel it especially with “Jeux d ‘Enfants’, The Twelve Pieces by Georges Bizet, how the two can make music together with care, attention and passion. But the assistants turning the pages did not have an easy match with Barenboim. Once he interrupts the page he turns with a gesture so energetic that you can hear the rustle of the paper across the room.

In fact, Cecilia Bartoli was supposed to give this festival the last shine, but she had to cancel in a short time due to illness. Bartoli looks more like a “deep basso” than a Mitsu-soprano, as director of the Hamburg Symphony Orchestra Daniel Kuhnel joked. The festival began in 2018 with Argerich’s commitment to Laeiszhalle as a concert hall, when everyone was excited about the new Elbphilharmonie. For the third time she comes to Hamburg with musician friends, comrades and relatives. A total of 16 concerts are planned over twelve nights through June 30. Big names like Anne-Sophie Mutter, Mischa Maisky, Gidon Kremer and Maria João Peres are right there. “The days are long and every hour is beautiful,” Connell enthuses. The happy, touched audience left the Laieszhalle Hall after kicking off an emotional festival that was measured.

From June 19, the world-class pianist invites you to the Martha Argerich Festival with distinguished guests in Liesale. More