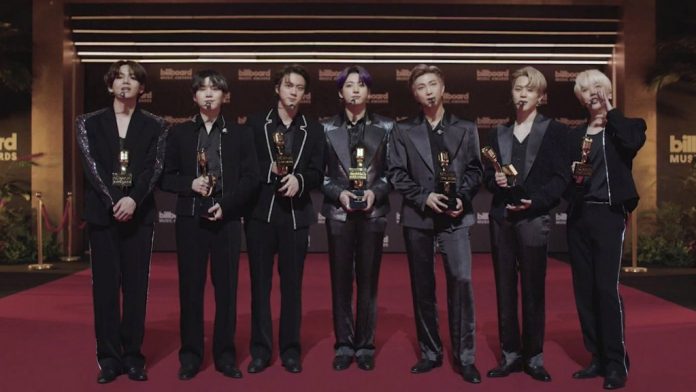 The boy band won the categories of Bestselling Song, Top Duo / Group, Top Song Sales Artist, and Top Social Artist during a BBMA concert that was broadcast live from Microsoft Theater in Los Angeles on Sunday (US time).

This is the first time that a septet has won more than two trophies since 2019, when the group won the Top Duo / Group and Top Social Artist Awards.

BTS was on the previously revealed list of winners in the Top Duo / Group categories, Best Sales Artist and Best Social Artist, and won the Best Selling Song Award with their hit song “Dynamite” during the ceremony.

The boy band won the best-selling song category by beating “I Hope” by American singer-songwriter Gaby Barrett who collaborated with Charlie Puth, “WAP” by American rapper Cardi B with Megan Thay Stallion, and “Savage” by American rapper Megan. Thee Stallion and “Blinding Lights” by Canadian singer and producer The Weeknd.

“Dynamite” was released last summer, and was the first song by a Korean band to reach # 1 on the main Billboard chart, making BTS the first South Korean artist or group to be nominated for a US Grammy Award.

BTS has won the Top Duo / Group Award again since their debut in 2019. The boy group has faced off against British-Australian hard rock group AC / DC, the American independent pop trio made up of the AJR brothers, Dan + Shay and the band American pop rock maroon 5.

In the Top Song Sales Artist category, BTS beat Justin Bieber, Megan Thee Stallion, Morgan Wallen and The Weeknd. This is the first time that a boy band has received this award given to an artist or group for their sales.

“It’s crazy to be promoted in the category of best social artist for five years in a row,” said rapper J-Hope on a social media network. “Thank you for your continued support.”

BTS will perform their latest single, “Butter,” for the first time at the BBMA concert later today.