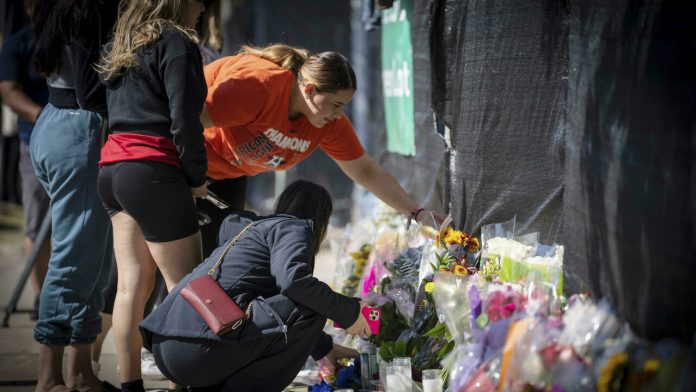 The investigation continues into the mob that killed at least eight people during the Astroworld Music Festival in Houston, Texas, Friday, November 5. The investigation into the circumstances of the tragedy is still ongoing. Not all victims have yet been identified. The first complaints were filed against the rapper and the organization of the event.

With our correspondent in Washington, naudin clouds

More than a million dollars. This is what the first complainant claims after the tragedy. He was defended by Thomas J. Henry Law of Texas, which announced on Sunday evening, November 7 in a tweet representing ” Many victims of the Astroworld Festival tragedy ».

The first complainant is Christian Paredes, a 23-year-old who said he “ seriously injured “During the party on the night of November 5, according to him daily Mail, who had access to the text of the complaint.

Christian Paredes is also suing the concert’s organizers, Live Nation, and the performance venue. In his complaint, he says that the deaths and injuries are due to ” negligence and recklessness »The accused are their agents and employees.

« Many people begged Live Nation security guards for help, but were ignored ‘, says the text quoted by the media.

The lawsuit filed in court in Houston ensures that Travis Scott actually did.” incite chaos » During previous concerts. It also accuses rapper Drake of contributing to the events by continuing to sing during the crowd.” It was out of control ».

Renowned lawyer Ben Crump announced on Sunday evening that ” Victims In particular, filing a complaint on behalf of a 21-year-old, Noah Gutierrez. The lawyer said that the latter ” He describes scenes of chaos and desperation, as he and other festival-goers in the VIP section endeavor to lift people from the ground screaming for help. ‘, Friday evening.

It is horrible that proper safety measures were not taken to protect the party members. We represent them to get justice and prevent this tragedy in the future. Please contact us and share any videos of this horrific incident:

Travis Scott’s behavior is at the center of the investigation

The criminal investigation is still ongoing. It may last weeks or even longer, according to Houston Mayor Sylvester Turner. The latter said that authorities were reviewing the video and talking to witnesses, concert organizers and people in the hospital.

Among the focal points of the investigators’ investigations was the identification of Travis Scott’s knowledge of the situation. During his show, the last performance of the evening, the situation worsened. The police chief explains that he himself went to see a rapper he knows personally, several hours before the show, to share his concerns about the crowd’s energy and management. According to other accounts, Travis Scott stopped performing when he saw his fans in distress near the stage.

In total, nearly 50,000 people were in the Astroworld Festival crowd, where more than 360 police officers and 240 security personnel were mobilized.

At about 9 p.m. local time, a crowd began to gather at the front of the stage, causing panic and the first casualties to begin. Then, authorities said, people began to fall and lost consciousness, causing more panic.

Miss France 2022: “everything is decided in advance”, a former Miss...

Princess Leonor and Infanta Sofia define their style at the Asturias...