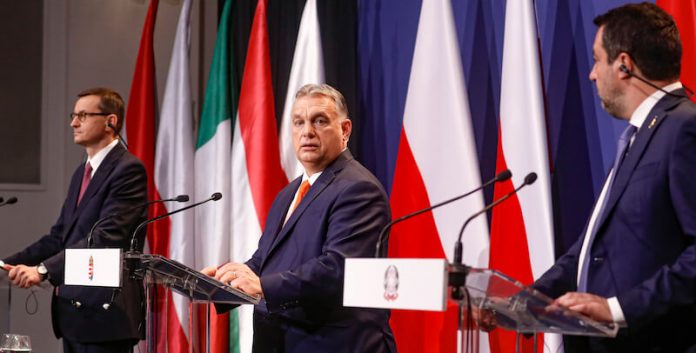 Sixteen right-wing European and far-right parties, including Lega, Fratelli d’Italia, Marine Le Pen’s National Rally, Fidez Viktor Orban, the Polish Law and Justice (PiS), they signed A “Declaration on the Future of Europe” claims that the EU has become “an instrument of radical forces that desire a cultural and religious transformation to the point of building a European super-state without nations” and that will destroy its founding values.

The declaration was presented as a further advance of plans to strengthen the alliance between Europe’s far-right parties, but in fact it appears to have been signed amid widespread discontent and skepticism, and appears to have few tangible results. Especially with regard to plans to form a single far-right sovereign group in the European Parliament, which does not seem likely at the moment.

The declaration contains a vague appeal to preserve what are defined as the “common and Christian “traditions and values” of European countries, beginning with the “family as an institutional unit”, and to solve the continent’s demographic decline with “pro-family policies” instead. With “mass migration”. But it does not include any kind of reference to concrete implementation plans that confirm the known differences in goals and interests between the parties that signed them.

In addition to the above-mentioned parties, the Spanish Vox Party and a number of other small parties from Austria, Belgium, the Netherlands, Denmark, Estonia, Latvia, Finland, Lithuania, Greece, Bulgaria and Romania joined the announcement. Among the missing far-right parties, notable ones are the Alternative for Germany (AfD), the Swedish Democrats and Geert Wilders’ Dutch Freedom Party (PVV).

See also  Is there a risk of "splitting"? The wind that scares the church

For years, right-wing European populist parties have tried to work together to transform the broad consensus gained in their countries into a force that could also influence European institutions, but so far they have failed due to internal disagreements and the alliances that have formed. In response, the pro-European center-left and center-right parties. Despite many meetings and negotiations, and despite the fact that a possible alliance in the European Parliament between sovereign and Euroskeptic parties would represent the second largest force in terms of the number of MPs, the failures accumulated so far have shown how complex the transnational alliance between nationalist parties is. very.

The announcement signed on Friday appears to confirm that things are not going as desired by Lega leader Matteo Salvini, perhaps the main supporter of the European far-right coalition project. last April He had met Orbán and Mateusz Morawiecki, Prime Minister of Poland and representative of the Law and Justice Party, have precisely this goal. His party, which adheres to the European Parliament’s Identity and Democracy group, has long lost its place in the national consensus compared to the Brothers of Italy (which adheres instead to the European Conservative and Reformist group, the ECR), and is being excluded from the roles. and positions of power in European institutions.

But among other large European far-right parties, few have the same interests in joining the European Parliament, especially those that adhere to the ECR, which relies on more strategic roles in institutions and also includes more moderate conservative forces (part of which published, However, a statement that appears to distance itself from the Allies, and reiterates adherence to the previous Charter of Values ​​signed in Prague in 2009). Not surprisingly, the Italy Brothers account confirmed on Twitter that it would remain within the ECR, and according to Republic He would have put off signing several times, eventually convincing himself.