Persia Digest
Home sport Covid-19: Almost two years after the start of the epidemic, China is... 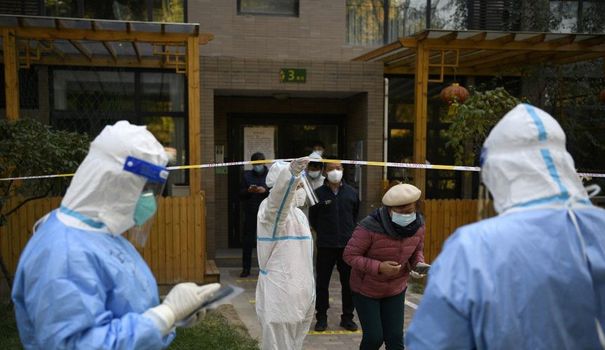 100 days before the Winter Olympics in Beijing, the Chinese authorities were on alert. Organizers announced Wednesday that COVID-19 will be the “first challenge” for the 2022 Olympic Games, which will take place from February 4-20. And with good reason: China is already facing an epidemic recovery right now, so great means with millions of residents trapped across the country.

Last week, the Olympic flame was delivered to China at a ceremony in Athens, sparking a protest by activists who denounced the existence of the communist regime in Tibet. But in addition to human rights issues, everything suggests that the competitions may be dominated by the fight against the novel coronavirus, six months after the Tokyo Summer Games were postponed for a year due to the pandemic.

The first country affected by the epidemic, China practically stopped the virus in the spring of 2020 after adopting drastic measures to control the population. The country has almost closed its borders to the rest of the world, and implemented strict control of movements via mobile apps.

This “zero infection” health policy also includes mandatory quarantine, confinement and testing once a few cases appear. Thus China has been able to resume almost normal social and economic activity since 2020, and only two deaths have been recorded in more than a year.

Is the situation about to change? At the moment, this is a very limited epidemic outbreak in the north of the country. But the rise in the number of cases in recent days crystallizes the concerns. On Wednesday, authorities reported 50 new infections in the past 24 hours. And the official toll since the beginning of the epidemic is less than 100,000, including 4,636 deaths.

On Tuesday, the large city of Lanzhou, 1,700 kilometers west of Beijing, imposed a quarantine for its 4 million residents, calling to stay at home unless absolutely necessary, after discovering a few dozen cases. Twelve provinces, or a third of the total, have beefed up prevention measures, including the city of Beijing – 1,400 km from Lanzhou – where 20 cases of infection were recorded in the past week.

DC on the teeth. In recent days, the authorities have asked residents to avoid “non-essential” trips outside the city, as well as large gatherings. Anyone arriving in Beijing from an area where Covid-19 cases have been identified must test negative. The Beijing Marathon has been postponed indefinitely. About 30,000 runners are scheduled to participate on Sunday.

Vaccination or quarantine at the Olympics

In an indication of the seriousness of the situation in the eyes of the authorities, the police in the capital announced, on Monday, the opening of three investigations for allegedly failing to comply with health rules. Among the suspects: infected people who would have concealed their health, trapped residents who would have built the wall, or pharmacists accused of giving clients fever and cough medicine, without informing authorities.

While concerns are high, the authorities want reassurance. Vice-Chairman of the Organizing Committee, Zhang Jiandong, promised that the planned measures for the Games would “reduce the risks and impact of the coronavirus,” while warning that participants who did not abide by the rules would be punished.

Concretely, what is the planned health protocol? The 2022 Games will be held in a “bubble” aimed at eliminating any risk of pollution for the rest of China. The expected 2,900 athletes will either have to be fully vaccinated or undergo a strict 21-day quarantine upon arrival in the country. Only spectators who are already in China will be able to attend the events.

“Vaccination, closed circuit management and regular screening tests are critical elements that will allow the Games to be held in complete safety,” the IOC told AFP.

To continue analysis and decoding wherever you are

Authorities planned 300 negative pressure ambulances to transport potential patients, without the risk of polluted air spreading outside. Hebei Province, which surrounds Beijing, has announced the installation of mobile laboratories during the games, which will be able to perform 40,000 screening tests per day. It remains to be seen how the health situation will develop in the coming weeks. Elsewhere in the world, such as Europe, many countries are currently facing a recovery as winter approaches.