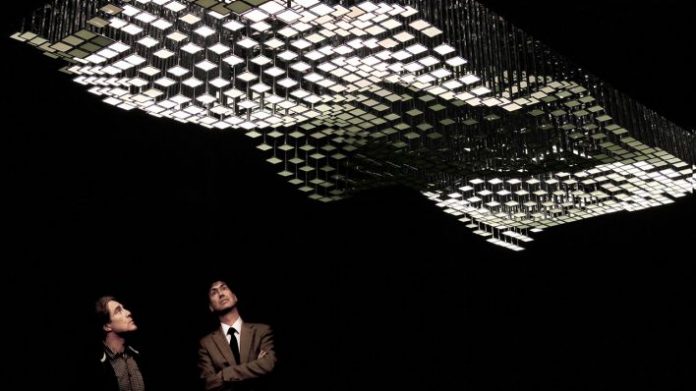 Berlin light artist Christopher Bauder has literally made a sensation over and over with installations like ‘Light Limit’ or ‘Deep Web’. Amazing projects that can only be seen for a short time. That must change now. from Hans Ackermann

Wavy light patterns meander across the pitch-black room on about 800 tiny, ultra-bright displays above the viewer’s head. Computer-controlled animation in which you quickly forget about space and time with your eyes wide open. “Liquid Sky” is the name of the installation by Berlin artist Christoph Bauder, which welcomes visitors to the new exhibition in the first room.

Dancing monsters of the deep sea

The first installation leads to two additional rooms in black, called “mirrored” and “circular.” Together, these first three rooms form a kind of “triple,” says Bauder. He also offers an explanation of the structures of light, movement, and sound: “With the three sculptures, you may experience a hypothetical underwater situation in the first room. In the two adjacent rooms, you can then see the ‘living things’ that live under this water surface.”

In fact, the spherical structure of the “inverse” is in some way reminiscent of living molecules, while the rotating circles of “circling” light can be modeled after the mysterious dances of fearsome monsters in the deep sea.

Children are likely to interpret lighting fixtures with their own imagination. The “young audience” that Christopher Poder would like to see in great numbers at the show. Dark matter is “definitely suitable for children.” He had previously shown installations such as the “Polygon Playground” for children, who would have had great fun with this light artwork. “At our shows in Amsterdam we always put on a ‘Children’s Program’ in the morning. And that was crowded with kids who ran incredibly quietly. Normally all hell happens in the ‘Polygon Stadium’.”

Even at the opening of the “Dark Matter” under normal conditions, there will certainly be a large crowd – thousands have recently visited the Bauder facilities “Skalar” and “Deep Web” in Kraftwerk Berlin. Due to the closure, the new gallery can only open with a very limited number of visitors.

With his employees, Boder says, he developed a holistic concept of hygiene for this purpose. “For each slot, five people are allowed to enter the gallery one by one at 15-minute intervals, and a ‘one-way system’ is in place. The number of people on site is also limited so that the fewest number of encounters possible takes place.

The site is on the Köpenicker Chaussee, “in the vicinity” of the currently closed “Sisyphos” club – as Bauder describes the area in Rummelsburger Bucht. The “Dark Matter” is approximately 4,000 square metres, and will occupy about a quarter of the total available space.

The light artist is happy to finally have his own site with “Dark Matter” in Lichtenberg. “We’ve already shown our shows at Kraftwerk Berlin and always regret that not everyone has had a chance to watch them. And so we asked ourselves what’s better than just playing for a month or three – better, of course, playing endlessly!”

For this reason, the site was acquired with several former factory halls in order to be able to permanently display light art in Berlin. The individual installations in the gallery are likely to change from time to time, Boder says, and perhaps a new hall will also be built on the site at the Spree.

At the start of the New Light Show, Christopher Poder took several photos of his installations. One of them shows the light artist, born in 1973, in a comfortable deck chair by a synthetic “campfire” – “Bonfire” is the name of this installation, which Bauder cynically questions his art: “Bonfire can also be understood as a criticism of technology. You sit there comfortably around a campfire, bonfires blazing and you imagine you can feel the warmth – but in reality it’s all fake, and it’s all just simulation, made with an incredible amount of technology. 20,000 individual light diodes that make you believe something like this!”

In fact, Boder continues, you’d rather sit next to a real fire. “Instead, you go to a media fair and have the feeling in your head that it’s fire – even though what we’re showing is of course not fire!”

Cutting-edge technology, made in Berlin

People have always been fascinated by light, something that Bauder has always fascinated and inspired in all sorts of technological inventions over the past 15 years: something like a computer-controlled cable winch system with which he can make light objects float through space in three dimensions. On the Deep Web, hundreds of water-filled, laser-lit spheres, in the Grid, the largest of seven installations, were shaped like luminous sticks dancing over the heads of the audience.

Of course, also in this installation, which ends the tour of the gallery, all the elements are communicated via a “rather complex program”. In this way, the “light” moves through the room in perfect sync with the music of composer and software developer Robert Henk, says Christopher Bauer.

In general, Dark Matter is the result of successful teamwork. “More than 100 people have certainly worked on this exhibition. Artists and technicians as well and software developers. Only in this complex interaction, through this special blend of ‘a pile of technology’, hopefully a light and poetic show will emerge at the end. It shouldn’t even be noticed. That, but — there’s a lot of “high-tech, made in Berlin,” says Bauder.

Installation in the video

Indeed, in the compositions of Christopher Powder, you hardly notice the colossal artistic effort. Alternatively, you can literally let yourself be illuminated by the diverse works of light art in the seven rooms from the very first moment. Just as the artist himself is still passionate about light.

“There are so many different kinds of light, and each has a special magic to me in its own way. Starting with the sun—what an idea that there is a celestial body floating out there that is so hot and radiating so much light that Boder says, ‘All life on Earth is nourished by it.’” On the other hand, there are the artificial light sources that we humans have invented, lasers with iridescent light or light-emitting diodes. “They allow us to represent light in any shape, color, and surface — well, I’m fascinated by it and I’m still discovering new aspects.”