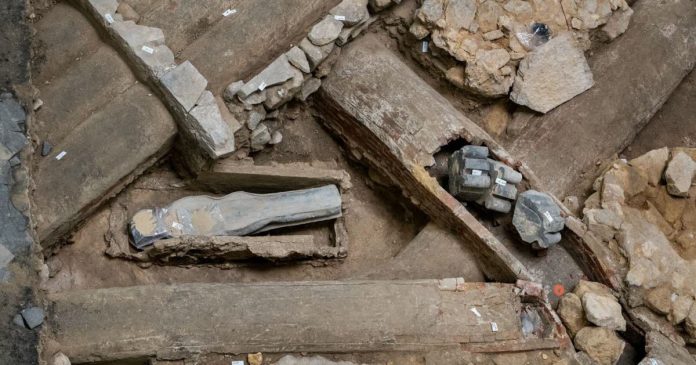 Lead sarcophagus recently discovered in the cathedral of Notre Dame de Paris will soon open at the Toulouse Forensic Institute (southwest), where it will have to reveal its secrets in accordance with human remains law, archaeologists announced Thursday.

The first study of the interior of the sarcophagus

Anthropological sarcophagus of the 14th century was discovered in March during archeological excavations prior to the reconstruction of the cathedral’s tower, which was partially destroyed by fire in April 2019.

Buried underground more than a meter, it was well preserved in the western part of the crossing. An endoscopic camera allowed the sarcophagus to be examined first, without opening the inside: the upper part of the skeleton of the deceased, the remains of plants under his head, perhaps hair, textiles and an unidentified object.

Separated from the cathedral on Tuesday, Toulouse was placed in a safe place while waiting to be sent “very soon” to the forensic agency, Inrap (National Institute for Archaeological Research for Prevention) told a news conference.

Forensic scientists and scientists are studying the bones and other objects of the deceased, identifying his gender and his health, and “purifying” him with carbon 14 using a more precise timeline, Christoph Bessner pointed out. Scientific Manager of Excavation.

“Sarcophagus is located on the shores of 14th-century furniture … If it really turns out to be medieval Sarcophagus, we’re in a very rare burial practice,” he commented.

“The human body is not an archeological object”

Surveys can also provide information on the rank of the deceased who belonged to a church or the forerunner of a secular elite. But “a human body is not an archeological object,” said Dominic Garcia, head of Inrap. “As a human remains, the Civil Code applies and archaeologists study it.”

A team from the Toulouse Forensic Institute has already examined the burial of Louis de Quengo, a British woman who died in 1656, and her remarkably well-preserved remains were unearthed during excavations at the Quent des Jacobins in Rennes, he recalled.

After the research is done, the sarcophagus will be reclaimed “not as an archeological object, but as an anthropological property.” Where is his final resting place? According to Inrap, a trace of a “re-burial” in Notre Dame is under study.

Luis de Cuenca was buried in 2015 in the tomb of Comte Doncotec, the Comte-de-Armor.

Guendouzi slaps Bayat towards his goal from another place