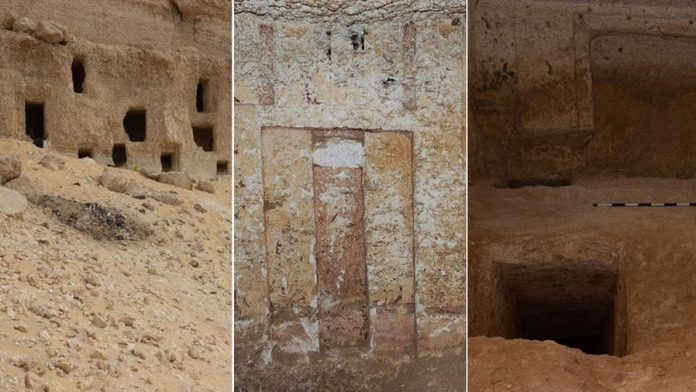 About 250 rock tombs dating back about 4,200 years were discovered in central Egypt by the mission of the Supreme Council of Egyptian Antiquities in Sohag Governorate. This was announced by the Facebook page of the Egyptian Ministry of Antiquities. Mustafa Waziri, Secretary General of the Supreme Council of Antiquities, specified in the text that a “well” was discovered in graves and “another with a slope ending in a burial chamber.” The burials “date from the end of the Old Kingdom to the end of the Ptolemaic period.”

“A tomb dating back to the end of the Old Kingdom” features a “fake door with the remains of hieroglyphic inscriptions,” mentioning the note without providing further details on this item. Scenes were also found in the cemetery depicting a “grave owner” celebrating sacrifices and “people making offerings to the dead.”

Excavations also led to the discovery of “many ceramic vases, some of which were used in everyday life and others in funerary furniture as miniature symbolic artifacts, known as“ fot ”:“ Small spherical vases with traces of yellow paint on the outside, ”mark the note again. In addition, “many small alabaster vases and remnants of a round metal mirror” and “human and animal bones and many pottery pieces” were found, in addition to “pieces of limestone with inscriptions that could represent funerary paintings of tomb owners dating back to prehistoric times. Sixth Dynasty ».

Egypt announced many archaeological discoveries in recent months with an announced intention to revive tourism, which accounts for about 15% of Egypt’s GDP, but has been declining since 2011 due to revolutions, Islamic terrorism, and now due to the epidemic.

When to eat it to lose weight, a revolutionary study – Libero Quotidiano

The most powerful passports in the world in 2021