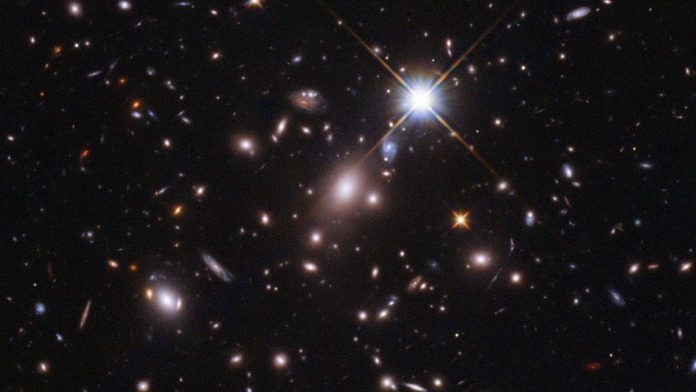 The choice of the name “Erndel” for the newly discovered star is apt. Because it’s the old English term for the morning star. If the last 13.8 billion years that the universe existed according to the Big Bang theory were viewed as just one day out of 24 hours, Earndel would have sent out his light, now captured, at about 1:34 AM.
For comparison: In this scenario, our solar system with the Sun and Earth appeared around 4:00 PM, the first life on Earth around 5:30 PM, the first humans just before midnight.

In other words, Earndel is really very big – about 3.1 billion years older than the previous record holder in the farthest single star category, also discovered by Hubble in 2018.

“We couldn’t believe it at first,” said astronomer Brian Welch of Johns Hopkins University in Baltimore, lead author of the study describing the discovery, which was published in the journal Nature. “Usually at these distances, entire galaxies look like tiny points where light from millions of stars mix together. The galaxy hosting this star has been magnified by a gravitational lensing.”

The research team estimates that Earendel is at least 50 times the mass of our Sun, and is millions of times brighter than the most massive stars known. But even such a massive bright star wouldn’t be visible at this distance without the normal magnification provided by a giant galaxy cluster, in this case WHL0137-08, which lies between us and Erendel. The galaxy cluster’s mass distorts space, creating a powerful natural magnifying glass that dramatically distorts and amplifies light from distant objects behind.

See also  WhatsApp is taking a break from voice messages

The effect is similar to the undulating surface of a swimming pool creating bright patterns of light at the bottom of the pool on a sunny day. The ripples on the surface act like lenses and focus sunlight onto the pool floor for maximum brightness.

Show the beginning of the universe

Of course, no one knows if Earndel is still around today. The only thing that is clear is that they existed 12.9 billion years ago. And so there’s a good chance it’s not made of the same stuff as the stars that surround us today. “There is a long-standing theoretical prediction that stars consisting only of elements formed shortly after the Big Bang – hydrogen, helium and trace amounts of lithium – should be even more massive than stars forming today,” explains Erik Zackrisson of Uppsala University. Sweden, a co-author of the study. “These protostars, known as Population III stars, have so far eluded observers but can be detected if they are greatly magnified by gravitational lensing, as in the case of the Earndel object.”

Astronomer Brian Welch thinks Earndell’s further explorations are a window into an era in the universe that “we know nothing about, but that led to everything we do know. It’s like reading a really interesting book, but it was going to start chapter two. Now we have a chance to see how it started.” everything “.

See also  After the success of the series, the South Korean company filed a lawsuit against Netflix

After Hubble, James Webb can try

Astronomers assume that Earndale will remain significantly inflated for years to come. The new, more powerful James Webb Space Telescope will be observing through 2022. If follow-up studies reveal that Earndale consists only of primordial hydrogen and helium, it will be the first evidence of mythical “third clusters” stars, believed to be the first stars to form after the Big Bang.

“With Webb, we may also see stars farther away from Earendel, which would be incredibly exciting,” says Brian Welch. “We’ll go back as far as we can. I’d like Webb to break Airndale’s record.”