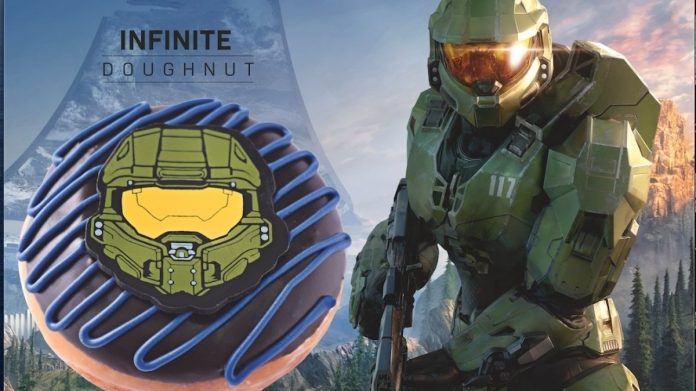 Halo Infinite may be coming out in November, according to donut announcements. Microsoft and Krispy Kreme are currently selling a major cake pop in Brazil.

With its infinitely circular shape, the donut is the perfect pastry to shorten your Hello Infinite waiting time. Maybe that’s what Microsoft thought, too, because the Xbox maker teamed up with Krispy Kreme Donuts to celebrate Master Chief’s 20th anniversary with sweet, greasy pastries.

For the occasion, the cake provider created a limited edition Halo Infinite cake with a blue glaze, on whose burrow the iconic Halo hero helmet sits. This donut gem will be available between July 30th and September 30th. At the moment, the halo donut appears to be limited to Krispy Kreme Brazil only.

What can interest all fans outside this region is the logo used to announce the new donut creation. Because of the slogan “Why are we waiting for November?” It is now expected that Xbox Mexico did not accidentally betray the month of Halo Infinite’s release on Twitter.

Why wait for November if we can start the festivities now?

It’s possible that the new installment in the series will appear in November, because Halo: Combat Evolved, Halo 4, and the Master Chief Collection all appeared in the same release window. In addition, developer 343 Industries has already confirmed the release period in the fourth quarter of 2021. There the shooter should appear on Xbox Series X, S, Xbox One and PC.

Halo: Combat Evolved was released in November 2001 and is celebrating its 20th anniversary this year – perhaps the proverb also refers to a possible celebration?

So far, Xbox Mexico has not deleted the tweet or released a statement about the ad slogan, which is now fueling the rumours. However, without an official statement, it will initially be just speculation. We wish all Mexican fans bon appetit!

Perhaps the sweet taste of Master Chief Donut will postpone the shocking defeats of the fans of playing against the new ODST bots.

Qanun: The famous Q could have been recognized thanks to artificial...