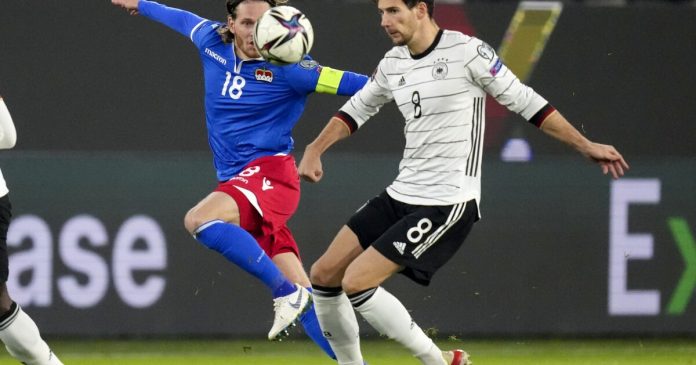 The German team announced, on Friday, the exclusion of German midfielder Leon Goretzka from Germany’s match against Armenia in the European qualifiers for the World Cup, after he received a blow in the face against Liechtenstein.

The Bayern Munich player was seeking a high ball when Liechtenstein defender Jens Hofer hit him in the face when he lifted one foot. Hoover immediately apologized and was sent off for dangerous play.

Goretzka was in the match for more than 35 minutes until the end of the first half, but the German national team now indicates that he will not participate in Sunday’s meeting with Armenia due to a “kick to the head and neck”. Germany has already qualified for the World Cup in Qatar next year.

Julian Draxler was also not called up for the commitment against Armenia. The Paris Saint-Germain midfielder was not used as a substitute against Liechtenstein due to a muscle injury that prevented him from participating in what could have been his first match for the German national team since October 2020.

Bayern goalkeeper Manuel Neuer and Borussia Dortmund striker Marco Reus were allowed to join their clubs for more time. Chelsea defender Antonio Rudiger will be suspended for one match after being sent off against Liechtenstein.

Pogacar won the third stage of the Tour of Slovenia