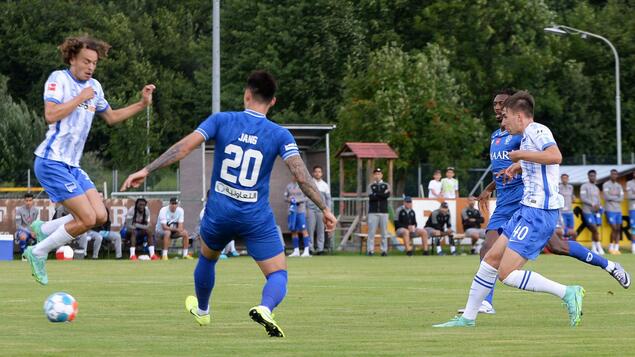 Herba plays only 1: 1 against Lபெbeck

A few seconds before the end Hertha BSc had another chance. But Tyson Redon came a little late against VfB Lூbeck goalkeeper Eric Grondemon. This was the end of a normal Test match in which Herta managed only 1: 1 (1: 0) against the regional division.

But the decision – and the third draw in a row in the production – did not bother coach Paul Darday: “Everyone knows something has to happen. We have left the standard. Now we are waiting.”

The game started 15 minutes later as guests were stuck in traffic on the motorway. When it started, the Berliners were tough against well-defending Lபெbeckers. Goalkeeper Eric Grondemon was there when Dennis Jastremsky tried. Shortly afterwards, Dodi Lukabagio, who was in the starting line-up as a center pioneer, fired it after Joan moved from Cர்டrdoba to FK Krasnodar. “We had very few perfect degrees, but you need refreshment for that,” Dartai said, referring to several intense training sessions over the past few weeks.

In the penalty area of ​​Herta, in front of 978 spectators at the amateur stadium, Theovaicio was very dangerous when he tried to return the ball to his own goalkeeper Niles Corbyn.

The Bundesliga team’s excellent move then took the lead. Kevin-Prince Bodeng was the starting point, wearing the Lukabagio suit Certar, who gave Granteman no chance. There was a bit of unrest after that because Lபெbeck’s Malek Fakro had already started hard for the second time, this time against Morton Dortoy.

Goalkeeper Alexander Schwalov and striker Davy Selke were suspended altogether for stress-controlling reasons. During the break, Dordoy made ten changes, with only goalkeeper Gorber continuing to play. The regional league was changed once, and this change paid off automatically after a few seconds. Elsemade Ramaz appeared free in front of Korber after a long ball and finished the equalizer.

In Hertha, as in previous Test matches, a lot of young players played after the break. Marlon Morganstern had a good chance to head the ball, otherwise there would have been plenty of crosses in Lபெbeck’s penalty area, but they posed no danger.

Women’s Cane: Morocco top Group A with win over Senegal