Persia Digest
Home Tech How does life exist on earth? Thanks to a croissant-shaped bubble... 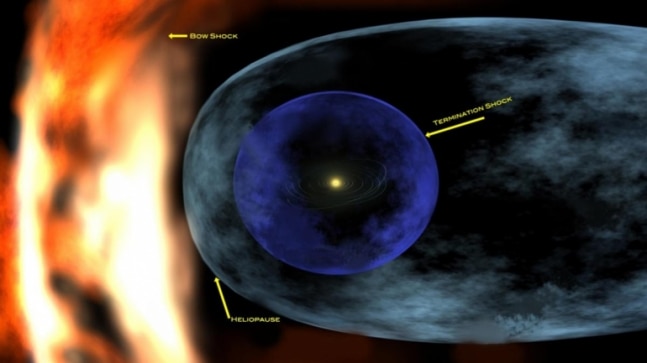 Humans have discovered more than 4,000 exoplanets across the vast reaches of the galaxy, but life exists on only one planet. It is not just a cosmic coincidence, but an interaction of scientific phenomena that come together for our existence on Earth. Among them is a protective bubble that covers the length and width of the solar system and that saves the Earth from dangerous cosmic radiation from supernovae, the explosion of stars in the universe.

“There are a lot of theories, but of course, the way cosmic rays could enter galaxies could be influenced by the structure of the heliosphere — does it have wrinkles and folds and that kind of thing?” says Merav Over, an astrophysicist at Boston University. Led by an international team of astronomers, Ophir has created some of the most compelling computer simulations of the heliosphere, based on models built on observable data and theoretical astrophysics.

According to NASA, the Sun sends a steady stream of charged particles called the solar wind, which eventually travels through all the planets to about three times the distance to Pluto before being obstructed by the interstellar medium. This forms a giant bubble around the sun and its planets, known as the heliosphere.

In a research paper published in The Astrophysical Journal, The team reveals that neutral hydrogen molecules flowing from outside our solar system likely play an important role in the way the heliosphere forms.

The researchers found that the heliosphere looks a lot like a croissant or even a doughnut. They explain that neutral hydrogen molecules come flowing through the solar system, making it impossible for the heliosphere to flow uniformly like a shooting comet.

“The model provides the first clear explanation for why the heliosphere’s shape is fractured in the northern and southern regions, which could affect our understanding of how galactic cosmic rays enter Earth and the near-Earth environment,” James Drake, an astrophysicist at the University of Maryland, a co-author of the study.

The heliosphere is the edge of the solar system, where the influence of sunlight ends. So far, only two man-made probes, Voyager 1, 2 have been able to cross that boundary and are currently traveling in interstellar space.

“This discovery is a major breakthrough, it puts us in the direction of figuring out why our model gets the distinct heliosphere shaped like a croissant and why other models don’t,” Ophir says.

The Legend of Zelda Breath of the Wild 2 ranking game...