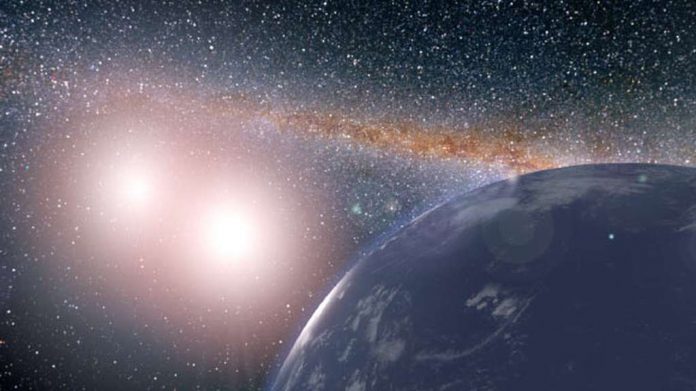 For nearly half a century, the creators of Star Wars envisioned a planet that sustains life, Tatooine, Revolves around a pair of stars. Now, scientists have found new evidence that five known multi-star systems, Kepler-34, -35, -38, -64 and -413, They are potential candidates for preservation of life.

A recently developed mathematical framework allowed researchers at New York University in Abu Dhabi and the University of Washington to demonstrate that these systems, Between 2,764 and 5,933 light years from Earth, In the constellations Lyra and Cygnus, support a permanent “habitable zone,” a region around the stars where Liquid water can persist on the surface of any yet to be discovered Earth-like planet. Among these systems, the Kepler-64 is known to have at least four stars orbiting each other at its center, while the other systems have two stars.

It is known that everyone has it at least A giant planet the size of Neptune Or more. This study, published in Frontiers in Astronomy and Space Sciences, is proof of the principle that the presence of giant planets in binary systems does not preclude the existence of life-support worlds.

“Life is more likely to evolve on planets that are within the habitable zone of your system, just like Earth. Here we investigate if there is a habitable area Within the nine known systems with two or more stars orbiting giant planets. We show for the first time that the Kepler-34, -35, -64, -413 and especially the Kepler-38 Suitable for hosting Earth-like worlds with oceansThe corresponding author, Dr. Nikolaos Georgakarakos, a research associate in the Department of Science at New York University in Abu Dhabi, says in a statement.

The scientific consensus is that most stars host planets. Since 1992, exoplanets have been discovered at an accelerating rate: so far 4,375 have been confirmed, 2,662 of them were first detected by the Kepler Space Telescope during its 2009-2018 mission to study the Milky Way. NASA’s TESS telescope and missions from other agencies have detected more exoplanets, instead European Space Agency It should launch its PLATO spacecraft to search for exoplanets in 2026.

Twelve of the exoplanets discovered by Kepler are “circular,” meaning that they orbit a close pair of stars. Binary systems are common and it is estimated that they account for between one-half and three-fourths of all stellar systems. Until now, Giant exoplanets have been discovered only in binary systemsBut it is possible that smaller Earth-like planets and moons have escaped detection.

Gravitational interactions within multi-star systems, especially if they contain other large bodies such as giant planets, are expected to make the conditions even more hostile to the origin and survival of life. For example, Planets can collide with stars or escape from orbit, While the surviving Earth-like exoplanets will develop elliptical orbits, and undergo strong periodic changes in the intensity and spectrum of radiation.

“We have known for a long time that binary star systems that do not contain giant planets have the ability to host habitable worlds. What we have shown here is that in a large part of those systems, Earth-like planets can still be habitable even in the presence of giant planetsSays co-author Professor Ian Dobbs Dickson, who is also from New York University in Abu Dhabi.

See also  PlayStation will not be present at this event

Researchers draw on previous research to predict the existence, location, and extent of the permanent habitable region in binary systems with giant planets. First they extract the equations to take into account Layer, mass, luminosity and power spectral distribution Of the stars, along with the extra gravitational effect of the giant planet. The eccentricity (i.e., the degree of ellipticity in the orbit), the sub-major axis and the period of the hypothetical Earth-like planet’s orbit are also considered, as well as the dynamics of the intensity and spectrum of the stellar. Radiation that affects its atmosphere. Another factor is the “climate inertia” of an Earth-like planet, that is, the speed with which the atmosphere responds to changes in radiation.

Then they are watching Nine known binary star systems with giant planets, All of them were discovered by the Kepler telescope, to determine whether habitable areas exist and whether they are “quiet enough” to host worlds potentially sustaining life.

“In contrast, the range of habitable areas in two other binary systems, Kepler-453 and -1661, is about half the expected size, because the giant planets in those systems would destabilize the orbits of additional habitable worlds. For the same reason, Kepler-16 cannot And -1647 host additional habitable planets.

Of course, There is a possibility that life exists outside the habitable zone or on moons orbiting giant planets“This terrain may be less desirable for us,” says co-author Dr. Siegfried Eagle of the University of Washington.

“Our best candidate for hosting a potentially habitable world is The Kepler-38 binary system, about 3,970 light years from Earth, is known to contain a planet the size of NeptuneDice, Georgiacarakos.

“Our study confirms that even giant planetary binary star systems are hot targets in the search for Earth 2.0,” he says.

With information from DPA.

They are making a robotic hand that can play Super Mario...