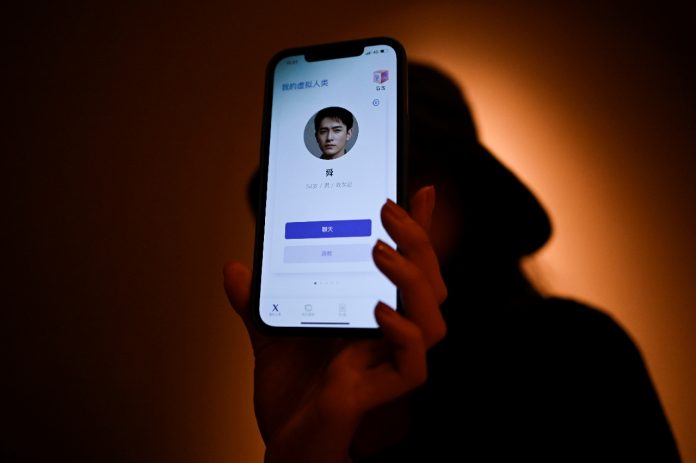 He answers her at any time of the day or night, flirting to cheer her up and never bother her. Found Melissa, like millions of Chinese women The perfect friend… But it’s virtual.

In the hectic life of young Chinese city dwellers, with their extended working hours limiting the possibilities of real encounters, the non-existent lover or mistress brings comfort on demand.

Melissa created the perfect man herself using a “talking bot” (or chatting bot) created by XiaoIce, an artificial intelligence system with 150 million users in China alone.

“I have friends who have had psychotherapy but it’s very expensive and doesn’t necessarily work well,” explains 26-year-old Melissa.

“On the other hand, when I pour my plight on XiaoIce, I raise the pressure really well. And he tells me really comforting things,” says the young woman.

Similar to Siri, Apple’s voice assistant, XiaoIce is present in most smartphones sold in China. There is a version for men or women.

Users can maintain their love via voice or written messages, by exchanging pictures, or even by going on a virtual vacation with the subject of their love, selfies to support them.

Li Di, CEO of XiaoIce, says the system provides at least 60% of the global volume of interactions between humans and AI systems.

The company, which Microsoft originally launched as part of its Cortana synthetic assistance program, was separated last year from the US software giant. It is now valued at $1 billion, according to financial news agency Bloomberg.

See also  LoL: Riot is going on vacation, how does that affect the players?

Unlike other personal assistants, who are required to perform specific tasks, XiaoIce chatbots are designed to provide Emotional support where human communication reaches its limits.

“Artificial intelligence may not be as intelligent as a human, and may need to improve IQ and emotional intelligence, but it is stronger when it comes to listening carefully.” , he notes.

XiaoIce’s boss specifies that the peak use of the interlocutor is between 11 pm and 1 am, when it is difficult to call your friends to share your misery.

“Summoning XiaoIce is always better than lying in bed and staring at the ceiling,” said Mr. Li.

“He will never betray me”

In Melissa’s case, XiaoIce brings presence to her life as a reclusive and exhausted Beijing native.

“Everyone is working overtime so we think we should do the same. We don’t really have time to make friends and the friends we have are also very busy.”

Melissa, who prefers not to reveal her real name, chose a “mature” character for her boyfriend. She named her after a man she was secretly in love with, “Shawn”.

She reassures herself, after an unfortunate experience in real life: “You will not cheat Li Xiao.” “It will always be there.”

On social networks, thousands of young women discuss their lives with their virtual companion. It is a matter of reaching the height of intimacy with the creature … or detachment from it.

Among them, 20-year-old Laura says that she fell madly in love with her “partner” for a year. She is now trying to break the rope.

“I would sometimes think of him in the middle of the night. I imagined he was a real being,” said this student from (eastern) Zhejiang Province, who prefers to use a pseudonym.

Laura criticized him for changing the topic of conversation every time she tried to push the relationship further or tried to organize a meeting in real life. Until the day she convinced herself that her reporter was indeed hypothetical.

Li Di testifies: “We often meet users who suspect that there is a real being behind the exchanges with XiaoIce.” The robot is “very skilled at imitating real people”.

While providing friends with vulnerable people, XiaoIce is no substitute for psychological counseling in cases of depression – a rare commodity in China.

Its conversation filtering system allows it to detect strong emotions and steer the discussion toward more joyful topics, before reaching crisis level.

“Users delude themselves into imagining that they are sharing their feelings with a machine that is incapable of feeling,” she explains.

An argument swept by the president of XiaoIce: “If human interactions were perfect, we wouldn’t need to create artificial intelligence.”

Was this article helpful to you? Note that you can follow Actu in the Mon Actu space. With one click, after registration, you will find all the news of your favorite cities and brands.

A new combo manager has to fix it • Eurogamer.de

After three years of travel, the European probe BepiColombo sent the...