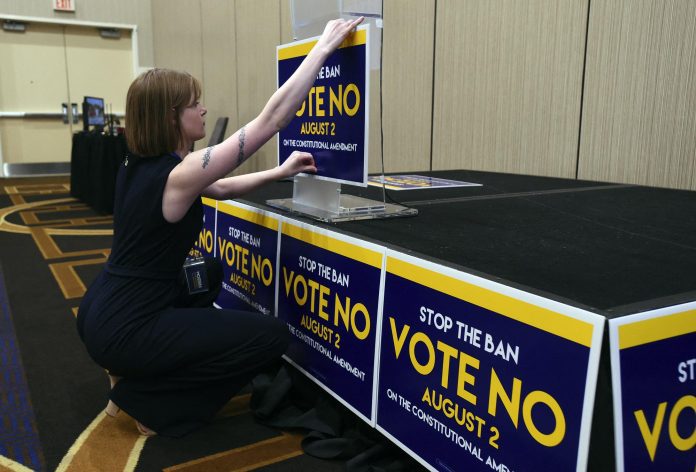 In the first electoral test on the right to abortion after the shocking Supreme Court ruling, the vast majority of Kansas voters decided through a referendum to continue ensuring the right to terminate a pregnancy as part of the state constitution.

With data still not definitive, more than 62% of traditionally conservative state voters voted against a proposal to amend the Constitution in order to allow the Republican majority leading the state to pass a law in Kansas to limit or repeal altogether. access to abortion, as dozens of other states have done since the ruling last June by the Supreme Court.

Another positive sign for Democrats is that yesterday in Kansas, where they voted in four other states as well for the primaries, there was a higher turnout than in recent years, which could eventually reach the all-time record. In 2008 – the year of Barack Obama’s election – when I reached 50%.

Thus, the high turnout recorded yesterday in Kansas underscores that the attack on the right to abortion could be a deciding factor for the upcoming November elections, motivating progressive voters to go vote in large numbers.

Current law allows Kansas abortions until the 22nd week, and the state has become a sort of haven for thousands of women in nearby states, including Texas and Oklahoma, who have passed anti-abortion laws in recent weeks.

“The Supreme Court’s extreme decision to overturn Roe v. Wade has endangered women’s health and lives,” he said. “The American people spoke tonight about it.” Joe Biden Commenting on the results of the referendum. He added that “the voters went to vote in record numbers to reject the extremist attempts to amend the constitution” by removing the protection of the right to abortion.

The president went on urging Congress to listen to the will of the American people: “This vote clearly demonstrates what we already know: the majority of Americans believe that women should have the right to abortion and have the right to make their own healthy choices.” and restore Roe’s protection by federal law.”

In New York, the transparent “Air” platform with a height of...