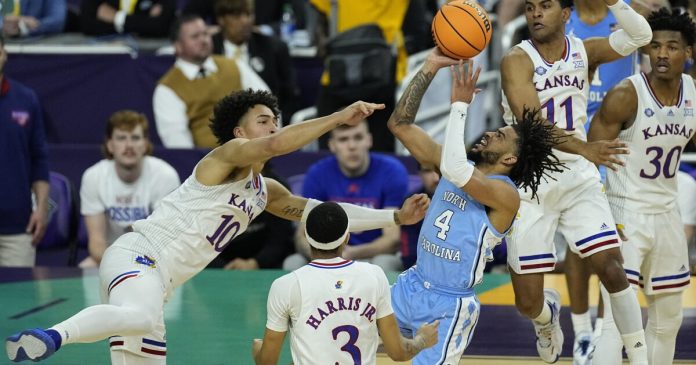 Kansas won its fourth NCAA title Monday on the back of a frantic second-half attack that wiped out a 16-point delay in a 72-69 win over North Carolina in an epic battle between colleges with strong basketball programs.

It was the biggest comeback in the tournament’s Finals history, overcoming a Kentucky deficit by 10 points in 1998 to defeat Utah.

David McCormack made the game-changing basket with 1:21 remaining, then another with 22 seconds remaining, putting the Jayhawks up by three points. North Carolina missed the last four shots, including Caleb Love’s third desperate pointer as the bell rang. The field barely touched the edge after the judges decided that the Kansas player, Da Juan Harris Jr., ran out of a pass with 4.3 seconds left.

The heels were goalless in the last 1:41.

After McCormack’s decisive basket, Love was banned. Then North Carolina had an offensive rebound and passed the ball to Armando Paco under the basket. But he lost his balance and lost the ball before limping off the field. He couldn’t go back.

That left Brady Mannick, who isn’t very good as a defender, facing McCormack, who managed to increase the lead to three points.

McCormack and Galen Wilson lead Kansas with 15 points each. Christian Brown took 10 of his 12 points in the second half and loaned Remy Walker added 11 of 14 in the last 20 minutes as the Jayhawks turned what looked like a lost cause into one of their best wins.

Bakout scored 15 points and 15 rebounds and was the first player to score a double in all six matches of the tournament. He finished the season with 31 doubles, but that wasn’t enough. Carolina was attempting to join the Villanova class in 1985 as the second eighth-ranked lead to win the March Madness.