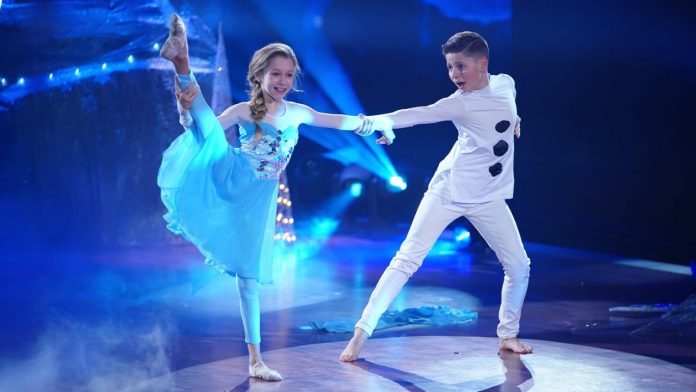 shone with the cup…

The first season of “Let’s Dance Kids” ended with a lucky winner. After two adorable dances, plenty of jury points and an online vote, Juna Szyuchenko (10), daughter of figure skater and actress Tanya Szuchenko (43), ascended to the top of the podium.

Angelina Stecher Williams (12), descendant of “Die Höhle der Löwen” star Judith Williams (49), came second. But the decision was very close. At the last show, both the finalists and their dance partners gave it all up again and the jury was excited.

There were two challenges in the programme, solo dance and freestyle, that had to be mastered. Young candidates succeeded in flying colors! Angelina and professional dancer Eric Ritich (12) recalled the samba from the opening show for the second time.

Analyst Mutsy Mabuse (40 years old) was amazed: “The choreography was very difficult. But you managed it easily.” There were a total of 29 points for it.

Competitor Juna and dance partner Tezio (10 years old) earned the same amount for Cha Cha Cha. For Joachim Lampe, 56, who usually has something to criticize, “good performance”. But what awaited you in the second round knocked even a professional off the bench.

Angelina and Eric offered a freestyle swim to the song “Colors of the Wind” from Pocahontas. Angelina’s mother, Judith Williams, was touched by a few tears. Motsi Mabuse is also built near the water. She stated, “Your aura has become more open. I was completely free. And that’s cool!” The jury wasn’t stingy with points this time either. All three dozen scoops rose.

Juna and Tizio followed them up in freestyle for the song “Let It Go” from the movie “The Ice Queen”. Jorge Gonzalez (53) couldn’t get over the enthusiasm. “I’m crazy about you! You dance so well.”

But Juna got the best compliments from professional dancer Motsy: “I’ve been working with kids for 30 years. And there’s a radiance you can’t teach anyone. A young dancer can also look forward to three teaspoons.”

So in the end everything depends on online voting. The conclusion couldn’t be more exciting. “It’s a good thing that I didn’t decide, or else I would have seen the cup in the middle and everyone get half a cup,” said moderator Daniel Hartwich (42).

But only one candidate could finally cheer. With online voting, Juna was chosen as the first star dancer and was able to take the trophy with her.

With ‘Red Alert’, Disney explores the topic of female puberty

Dana Paola surprises with a new look on social networks