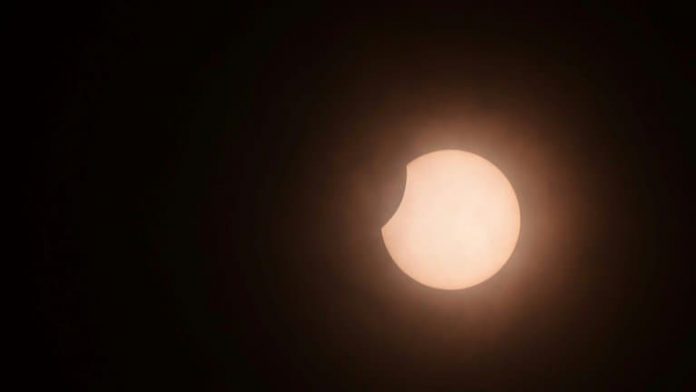 In Paris, the phenomenon will start at 11:13 a.m., peaking at 12:12 p.m. before tapering off until 1:15 p.m. If you are not equipped to monitor it without danger, the Paris Observatory offers a recording.

The moon meets the sun at midday. A solar eclipse will pierce the northern hemisphere skies this Thursday, over a strip of about 500 kilometers that stretches from Canada to Siberia, and passes through France, where it will be only partial.

If you are not equipped with special glasses or protections, you can still enjoy the show by watching a video Paris Observatory. In the capital, the phenomenon will start at 11:13 a.m., peaking at 12:12 p.m. before tapering off until 1:15 p.m.

At the extreme, the so-called annular eclipse, residents of the highest latitudes will see the moon slowly slipping in front of the sun, turning it for a few minutes into a thin luminous ring, like a “circle of fire” in the June sky. In our latitudes, if the sky was clear, astronomy enthusiasts would be able to observe the part of the sun obscured by the black disk of the moon, 16% at night, 13.2% in Paris, 5.5% in Toulouse and only 2.8% in Marseille.

Be careful, in spite of everything, this phenomenon will be dangerous for the eye, with the risk of irreversible retinal burns: it is necessary not to look directly at the star, even with sunglasses or through a cloud. The most curious will have to protect themselves with glasses sold in astronomy stores (beware of used eclipse glasses), or use the means of observing amateur astronomers. It can also be thought of indirectly, by dropping onto the floor, using a piece of cardboard with holes in it, or a skimmer.

The sixteenth annular eclipse of this century

This is the first annular eclipse of 2021 and the 16th of the 21st century. This astronomical phenomenon occurs during the period of the new moon, when the Earth, Moon and Sun are completely aligned.