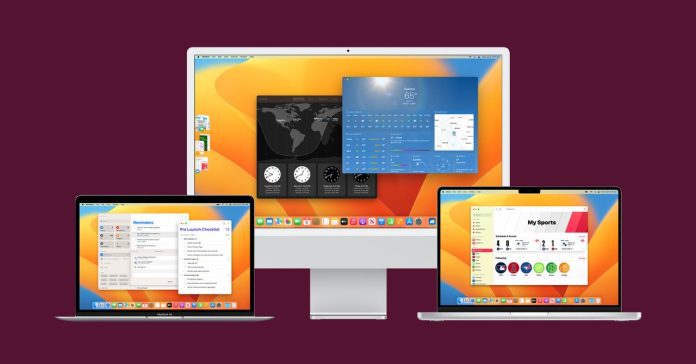 say goodbye to Monterey and VenturamacOS Ventura, that is. Apple officially revealed the latest version of its desktop operating system at its annual Worldwide Developers Conference this morning.

macOS Ventura, also known as macOS 13, will pack a variety of new features into desktop and laptop computers when it becomes available this fall. (New macOS releases usually arrive in September.) In addition to updates for Messages, Safari, the Mail app, and Continuity, there’s an all-new multitasking tool called Stage Manager. The latest version of macOS Ventura is currently only available as a developer beta, but we’ve rounded up all the important features you can look forward to.

Is your Mac compatible?

Each version of macOS is provided as a free update on supported Apple devices. If you are wondering if your current Mac is compatible with Ventura, here is a list of all the models that will be able to run the new operating system:

In an effort to help us stay on task, Apple’s new Stage Manager feature automatically organizes all the open windows and apps on the left side of your screen. This makes it recognizable at a glance and in full view rather than being hidden behind other windows or down below in the dock. Stage Manager keeps whatever window you’re currently using in the center of the screen. You can also group windows and applications together for specific projects, and rearrange the size and position of windows within the workspace you focus on. Switch between windows as often as you need to, and Stage Manager will maintain your groups and arrange windows within the group.

We’ve all sent unfortunate texts before, and Apple clearly knows that. With macOS Ventura, you can now edit or delete messages up to 15 minutes after they’ve been sent. You will also be able to recover deleted texts for up to 30 days. Those with their read receipts can mark a message as unread – which hopefully will take the pressure off to respond right away. Since the Messages app works on many Apple devices, these features will of course also be available on iOS 16 and iPadOS 16.

The native Mail app in macOS is getting some usability improvements that bring it into line with Gmail and other modern email clients. Ventura users will gain the ability to unsend emails soon after they are disconnected, and schedule emails to be sent at a later time. You’ll receive alerts for follow-up emails that were sent a few days ago and have not yet received a response. And if your email talks about an attachment or someone a copy was sent to, but you forgot to attach anything or a copy to anyone, you’ll get an alert. Finally, searching in your inbox will become more convenient. Click the search box within Mail and it will bring up a list of your recent contacts, documents, photos, and emails before you start typing.

Coming to Safari is an advantage for families or co-workers who do a lot of planning together. Tab groups allow you and your friends to share your favorite websites and browser bookmarks with each other. You can create a group bookmark list and use it as a shared landing page as well. Others in your group of shared tabs will be able to see the website you are currently browsing. (What could possibly go wrong?) It is really intended for group planning and research sessions. Apple also adds the ability to instantly start a FaceTime call or group chat.

Apple is up to the task of killing traditional passwords, and it’s teamed up with the FIDO Alliance to create a secure, passwordless login system called Passkeys that will roll out this year. The passkeys are only stored on your device and never on a web server, so they are virtually immune to phishing attacks. Lily Hay Newman wrote a story earlier this year that takes an in-depth look at the mechanics of Passkeys, but here’s the gist: Instead of typing in a password when you land on the login page, you’ll be prompted on your Mac’s screen to pick up your iPhone or iPad and use Touch ID or Face ID to verify your identity. The two devices talk to each other, and with that, you’re signed in. Your passkeys will sync across all of your iCloud-enabled devices, including iPhone, iPad, and Apple TV, as well as your Mac (end-to-end encryption). On non-Apple devices, you will have to sign in with your iPhone. However, Google and Microsoft are part of the same group that works with the digital identity organization FIDO, so similar functionality should come to Windows and Android soon.

If you’ve ever wanted to use your iPhone’s excellent camera instead of the relatively bad camera on your Mac during video calls, your wish is about to come true. Apple introduced a new feature called Continuity Camera. It will work wirelessly. If you have a newer MacBook (with an M1 or M2 processor), it will automatically recognize your iPhone’s camera whenever it’s nearby. From there, you can take advantage of the same features you find in modern Mac cameras, including Center Stage and Portrait Mode. The company even plans to sell a circular plastic stand that mounts to your iPhone so that the phone’s camera can easily be placed on top of the MacBook’s display.

Apple introduced two additional features that take advantage of the iPhone’s advanced optics. With Studio Light, the camera will brighten your face while blurring the background. A feature called Desk View shows your face and an overhead video of your desk at the same time. It does this by taking advantage of the wide field of view of the iPhone’s ultra-wide lens and separating the image by arithmetic to create two separate views. At least in the demo shown at WWDC, the result looks like you’re using two cameras – one pointing toward you and one pointing down.

Skyrim Anniversary Edition comes with everything in Creation Club