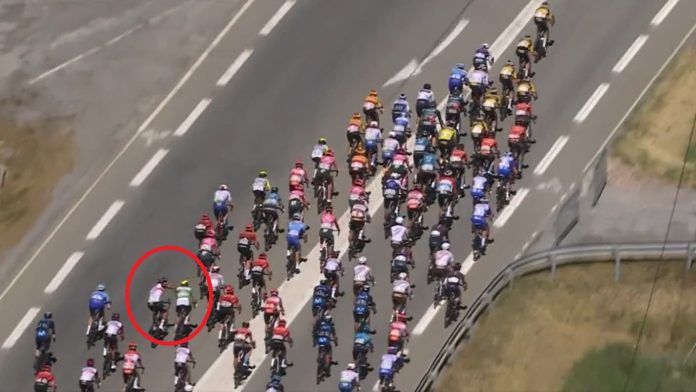 Less than ten kilometers from the end of the sixth stage of the Critérium du Dauphiné in Gap on Friday, Juan Sebastien Molano was guilty of a poor move on Frenchman Hugo Page. The Colombian punched him after an involuntary gap. It was excluded.

Colombian sprinter Juan Sebastian Molano had his nerves on French Hugo Page, on Friday during the sixth stage of the Critérium du Dauphiné. As peloton was struggling to get back into the morning break in a touchdown segment, the Team UAE rider came to Hugo Page to cheer him up.

If Molano’s anger is initially expressed with empty gestures and perhaps not very pleasant words towards the Chartres native, he ends up hitting the face of the tricolored (20-year-old) young man.

Before delivering this blow to the rider from Intermarché-Wanty, Molano hit him on the bike, losing the green jersey wearer’s balance. The feud between the two heroes comes from an involuntary deviation from the page, blocked by another competitor in a curve.

As his team indicated at the end of the afternoon, Molano was disqualified for the bloodshed. “I made a huge mistake, I want to apologize, the person in question reacted.”

In the end, peloton was never able to get back into the group at the front and let Valentin Veron win. In the back, it was Molano who ruled the peloton and finished seventh in this sixth stage of the Critérium du Dauphiné between Rives and Gap. Hugo Page, who was wearing the green jersey and had already been in the top ten three times since the start of the event, finished 14th.

The riders will be set with Fogani on Saturday and then with the massive De Solison Hill on Sunday at the end of the race.

League of Legends is...

Can Lightning complete Game 7 of the Stanley...

The amazing rock formations documented by NASA's Curiosity probe provide evidence of a dry climate in the Red Planet's ancient past. During the past ten...

Tomateros falls into a great duel against the sultans