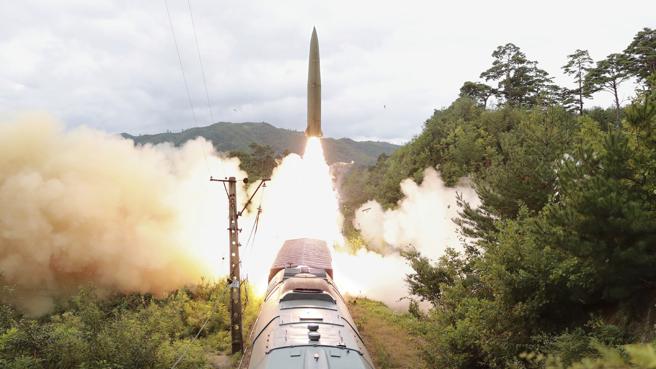 The last pair of North Korean ballistic missiles were launched from a train emerging from a tunnel under a mountain. On Wednesday, the Japanese defense spotted the firing of the bombs, but did not notice (or report) the convoy. This morning’s newspaper Rodong Sinmun in Pyongyang Post a series of photos in the test. According to North Korean propaganda, this was the first test firing of the new test “Railway Rocket Regiment”It was established “to deal harsh blows to the forces that threaten the homeland and divert our capabilities on the lands.”

North Korea It has previously shown and used mobile launchers mounted on large wheeled vehicles, but this is the first time it has used a train in its missile tests. according to Ankit Panda, Research Fellow at the Carnegie Endowment, “Railway rocket artillery is no better than mobile roadside artillery, but it causes another headache for defense planners in South Korea and America. Ready-to-fire solid-fuel rockets can come out of a railway tunnel and be launched, even if the point is known.”

In the past few years Kim Jong-un It ordered its military to develop a combination of missile-launching capabilities to make its deterrence more robust. The two missiles launched from a train yesterday fell Sea of ​​JapanAfter a distance of 800 km. South Korea has also accelerated the arms race. Wednesday, a few hours after the northern test, South Koreans test-fired a ballistic missile from a submarine for the first time. Kim Yo Jong, sister of the Marshall of PyongyangHe responded by threatening to “totally destroy” bilateral relations with Seoul.

Attacks and burning of churches: the nightmare that shook Canada

The first transfer of migrants from the UK to Rwanda fails