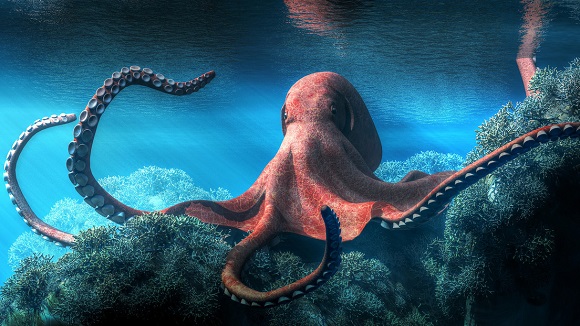 Octopus is an exceptional organism with a highly complex brain that has unique cognitive abilities among invertebrates. Photo: RT.

A study by Italian scientists showed that the same types of jumping genes are active both in the human brain and in two species of cephalopod mollusks of the family Octopodidae: Octopus vulgaris which is the common octopus. and ‘Octopus bimaculoides’, also called California octopus.

for scholars, Octopus is an exceptional organism with a highly complex brain that has unique cognitive abilities among invertebrates.

It is so extraordinary that in some ways it has more in common with vertebrates than with invertebrates, according to a statement about the discovery published by the International School of Advanced Studies (SISSA) in Trieste.

Experts from this university center conducted the study with others from the Aquarium of Naples.

More than 45% of the human genome is made up of DNA sequences called transposons, or transposons. These genes are sequences that carry genetic information only to be able to move within the genomes of organisms.through the molecular mechanisms of ‘copy and paste’, or ‘cut and paste’, the article suggests.

In most cases, these elements remain “silent” – they have no visible effects and have lost the ability to move. Some are inert because they have accumulated mutations across generations; Others are healthy but cellular defense mechanisms are blocked.

From an evolutionary point of view, Transposons may still be useful as “raw material” for another evolutionary leap.

Among these, the most important are those belonging to the so-called LINE family (Long scattered nuclear elements), of which there are hundreds of copies in the human genome and is still active.

Many scientists believe that LINEs are related to cognitive abilities such as learning and memory.: They are particularly active in the hippocampus, the most important structure in our brain, which is responsible for controlling neurons in learning processes.

The octopus genome, like ours, is rich in jumping genes, most of which are inactive.

Focusing on transposons that are still able to ‘copy and paste’, the researchers identified elements of the LINE family that could be active and functionally important for cognition in the central nervous system of highly intelligent organisms such as octopuses, according to the study published in the journal BMC Biology.

“The discovery of an active LINE family element in the brain of the two species of octopus is very important because it supports the idea that these elements have a specific function beyond mere ‘copy and paste,'” Remo explained from the SISSA Computational Genomics Laboratory.

Functional similarities between the octopus brain and the mammalian brain The LINE element identified is “a very interesting candidate to study and improve our knowledge about the evolution of intelligence”Graziano Fiorito, Director of the Department of Marine Biology and Evolution at the Anton Dohren Zoological Station concluded.

How many years can you survive on Mars?