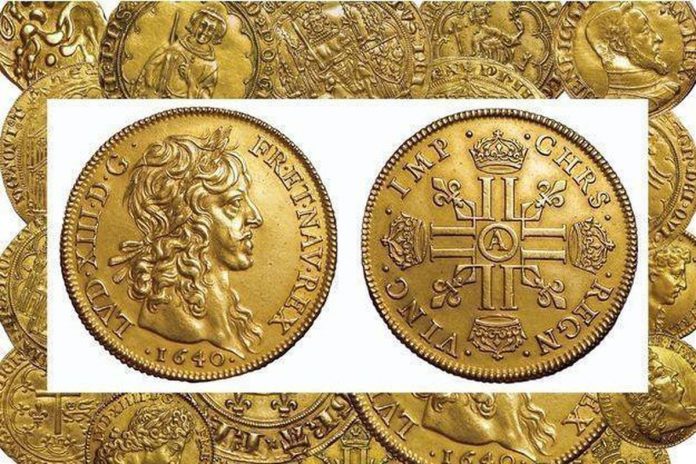 The hoard, made up of 239 gold coins, minted during the reigns of Louis XIII and Louis XIV, was discovered while working on a chateau in Finistère.

A hoard of 239 gold coins, minted during the reigns of Louis XIII and Louis XIV and discovered while working in a chateau in Finistere, sold for more than one million euros during a sale at Maison Ivoire Angers/Deloys on Wednesday.

According to the auction house, a total of 235 of the 239 stumbles were sold, while the owners kept four as souvenirs.

The total result of the sale was more than 1 million euros, Maison Ivoire said, adding that the auction came to 830,000 euros excluding fees, with the auction house earning about 20% on each sale. The parts were “fully valued at €250,000 / €300,000”, recalls auction house Angevin.

Prior to the sale, nineteen of them were preempted by the Musée de la Monnaie in Paris. During the sale, which began at 2 p.m., each piece was sold separately. Among the sales highlights, the “Louis d’Or à la Croix de Templiers” from 1640, was minted in Paris. It was listed for €8,000, against €46,000.

“Double Louis with a long wick” of 1646, minted in Dijon, with the distinction of being included in only 120 copies, was offered for sale at 8000 euros, and also sold for 46000 euros. “The auctions were everywhere, indoors, online and on the phone,” Florian de Oissonville, auctioneer at Deloys Angers, commented in a press release.

The discovery of this treasure, made up of 239 gold coins, was revealed in 2019 while working on a mansion in the heart of Bigouden’s country in Bluesvet (Finisterre), in early September. A couple decided to restore the mansion they acquired in 2012 and combine the three buildings of the property into one, entrusting the work to a stonemason: three craftsmen then discovered, within the ‘wall’, a metal chest filled with gold coins.

This treasure “is the undoubted result of savings from a wealthy merchant or farmer,” Florian de Uissonville explained on September 2nd. The proceeds from the sale will be divided into two parts, half for the three artisans who discovered the treasure, and half for the owners, in accordance with the law in force in France until July 2016.